A Century of Style: 100 Years of 4-H Fashion is the brainchild of Dr. Joyce Smith, OSU Extension Clothing and Textiles Specialist, and her swansong as well. Joyce is retiring this year, with over 25 years experience working with 4H Youth, Fashion Boards, and the Fashion Revue. She thought that since this was 4H’s centennial year, it might be fun to showcase some of the clothing projects from the last 100 years. The only problem was that we had no 4H clothing projects in the Collection. So, we put out a call to the counties to see what kind of response we would receive, to see if there were even enough pieces to make up an exhibition. Maybe we could fill one floor of the galleries. Well, to our happy surprise, we received over 400 responses. Unfortunately, that meant we had to go through the painstaking process of editing some of the offerings because we didn’t have enough gallery space or mannequins to show all of them. We tried to be fair and include at least one thing from each donor, resulting in over 100 items in this exhibition.

Many donors to this exhibition included letters with their donations, writing about how important and meaningful 4H has been throughout their lives. Several are from 4H families that go back four and five generations. Each garment is special to each donor, many having fond memories and stories attached. We recorded some of these stories that accompanied the garments into the exhibition booklet.

Thanks to Joyce for her creative ideas, we will miss them. Thanks also to all the donors who submitted garments for this exhibition. Without all of you, this exhibition would not be possible. To think that all of these beautifully crafted items were made by someone at home and not bought in a store is truly amazing.

A Century of Style is not just about sewing. Although many of the projects are vehicles for learning hand stitches and machine stitching, this exhibition showcases other forms of manipulating fibers and fabric such as embroidery, crewel, drawn work, felting, crocheting, quilting, and printing.

A microcosm of the twentieth century, the projects represented in A Century of Style reflect that era’s social history. We were unable to locate any projects from the first ten years of 4H, but are fortunate to have three cotton dresses from the 1920s. Two of these dresses are very simple in construction, with no shoulder seams. The pattern was placed with the shoulders on the fold of the fabric, requiring finishing of only the neck opening, side seams and sleeve openings; not the most economical use of fabric which was to become more of an issue in the next decade during the Great Depression.

We received very few projects from the 1930s, the majority being non-clothing items. Of the two dresses offered, one was a 4H uniform from 1932, and the other was a dress-up dress from the end of the decade. A very special object that represents the frugalness of the decade and the necessity to make clothing last is a pair of child’s socks that show examples of darning and mending.

The 1940s projects made from feed sack fabrics reflect the continued need for economy and frugality due to the shortages of materials caused by the war effort. The majority of clothing items were from the years before and after the war. The increased number of 1950s and 1960s projects reflects this country’s emerging affluence.

The ‘youthquake’ of the late 1960s/early 1970s brought evolution to 4H projects as well. No more aprons and tea towels as beginner projects, rather elastic waist skirts, triangle scarves, drawstring bags and simple shift mini dresses that were the fashion for the day.

Issues of gender equity began with women’s liberation in the 1970s. No longer were dresses the only type of garment made for school clothes. The introduction of trousers in all their various forms: knickers, gauchos and slacks, were worn to school and as sportswear-a new category or women’s clothing. In a true example of equality of the sexes, the first project tailored by a male 4H member was in 1974.

The ‘back to the nature’ peasant and country styles of clothing epitomized by the ‘Gunne Sax’ dress patterns gave way to disco glamour and bright jewel colors in the 1980s and early 1990s. In its continuing evolvement, 4H introduced new projects to keep up with the times. Sewing by the end of the twentieth century was no longer an economical necessity, but a leisure activity that could be, at times, expensive. ‘Clothing for your career’ and ‘creative costumes’ were two projects introduced to provide an outlet to meet the challenge. 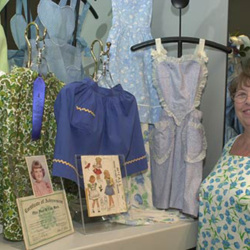 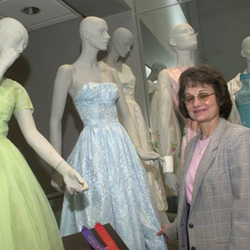 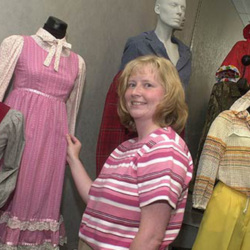 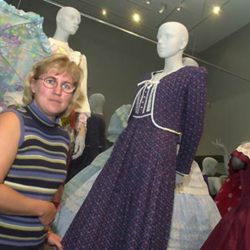 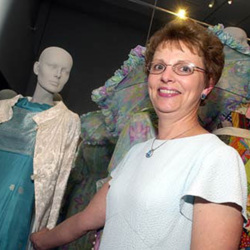 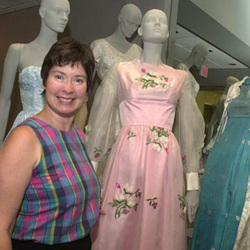 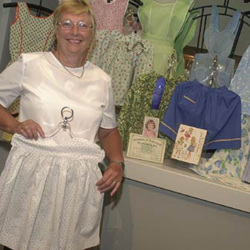 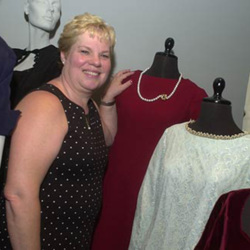 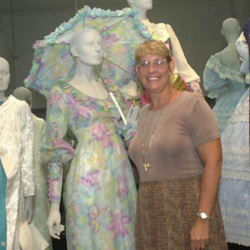 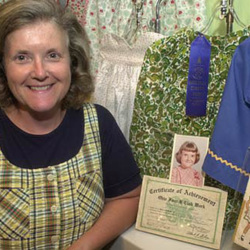