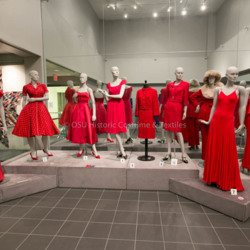 Media coverage of presidential campaigns turns our states into either red or blue, depending on which political party, Republican or Democratic, wins that particular state. While this color coding now seems to have always existed, it has only been in widespread use since the onset of color television, and the exclusive use of red for Republican and blue for Democratic has only existed since the 2000 election.

This exhibit was displayed in 2016, an election year, and we thought it would be timely to explore these colors and their relationship to historic clothing and textiles. Our interest is not in arousing political partisanship, but in exploring the cultural meanings of these colors in societies, the psychology of red and blue, and some of the early natural dyestuffs used to color textiles and fibers. As you go through the exhibition, we encourage you to choose a favorite from among the 46 garments and textiles on display, as well as from among the red and blue accessories and buttons.

You are encouraged to choose between the two colors as well, as our title suggests, but on this campus where scarlet is another term for red and blue is one of the colors of that team up north, we think the choice might be very one-sided