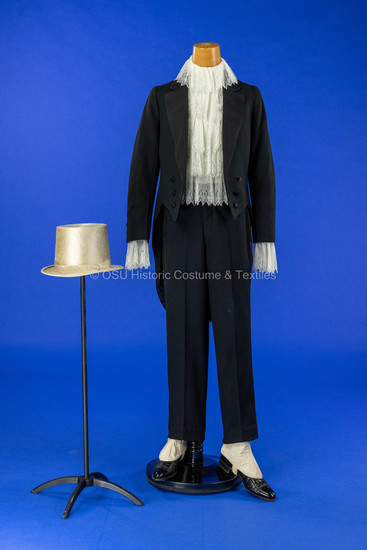 Black tailcoat with silk lapels. Coat is single-breasted with 6 fabric covered buttons and fake buttonholes; black satin lining in body of coat, off white silk in sleeves; two buttons at each wrist; fake vents in sleeve hems; black wool pants with figured braid down each outer side of legs that has faded to brown. Tailcoat is accessorized with detachable lac cuffs and a matching flounced lace dickey. The tailcoat also includes a white top hat and black leather ankle boots with white spats.

Blackface performance and minstrelsy is a disturbing and difficult topic. We encourage you to visit these sources to learn more about the history and long-term implications of this practice.

"Blackface: The Birth of an American Stereotype" by The National Museum of African American History and Culture at The Smithsonian.

"History of Minstrelsy: From "Jump Jim Crow" to "The Jazz Singer" by The University of South Florida Libraries Special Collections.

Beginning in the 1830s, white musicians began performing minstrel acts wearing black face make up. The primary function of blackface was meant not only to mock African Americans, but also to serve as a “mask” which performers could hide behind while mocking the socially powerful. In addition to applying black face makeup, blackface minstrelsy involved wearing wigs and eccentric costumes. John J. Murray was the youngest child and only son of Irish immigrants, Thomas Murray and Mary Flaherty. Thomas and Mary emigrated to the U.S. from Ireland in 1880 and John and his two older sisters were first generation Americans. While John never lists acting as his profession, according to the 1910 census he was a waiter at a coffee house showing that waiting tables has been a common job for struggling actors for decades. Murray’s Irish immigrant background is important in understanding his relationship with minstrelsy. The National Museum of African American History & Culture wrote the following regarding the performance of blackface:
“Historian Dale Cockrell once noted that poor and working-class whites who felt “squeezed politically, economically, and socially from the top, but also from the bottom, invented minstrelsy” as a way of expressing the oppression that marked being members of the majority, but outside of the white norm. Minstrelsy, comedic performances of “blackness” by whites in exaggerated costumes and make-up, cannot be separated fully from the racial derision and stereotyping at its core. By distorting the features and culture of African Americans—including their looks, language, dance, deportment, and character—white Americans were able to codify whiteness across class and geopolitical lines as its antithesis.”
Murray’s minstrel costume is meant as an exaggerated form of upper-class formal dress. The traditional black wool tailcoat and trousers is made pretentious and flamboyant by the addition of white plush top hat, lacy cravat and cuffs. It is meant as a mockery of the upper-class dandy, while also ridiculing those who attempt to imitate the upper class with no true knowledge of fashion. The shortened pants and white spats would draw the audience’s attention to Murray’s feet and made it easier to see his dance steps from the stage. Murray would have presented quite the comedic figure, given that he stood at only 5’3” tall and this costume is quite over the top. 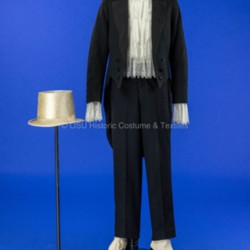 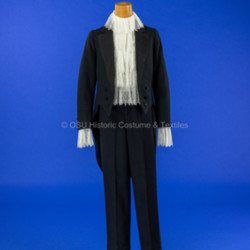 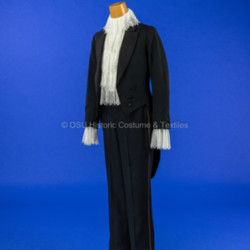 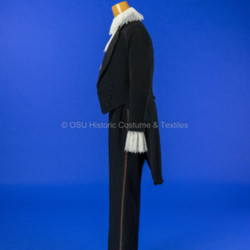 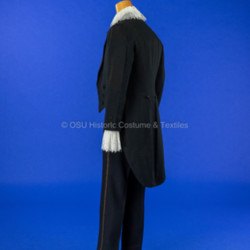 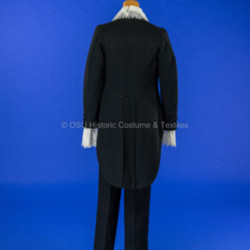 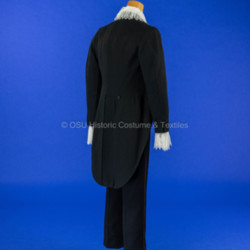 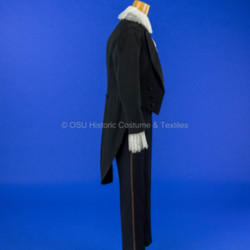 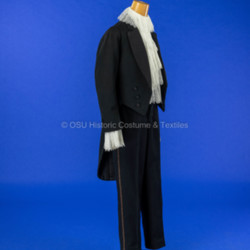