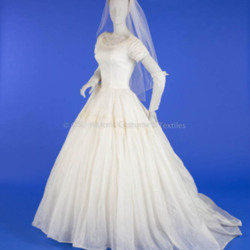 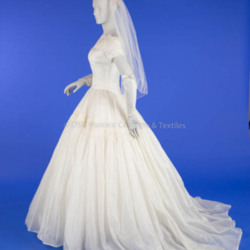 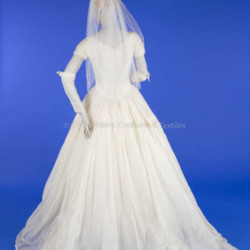 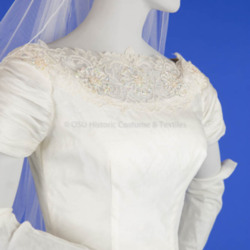 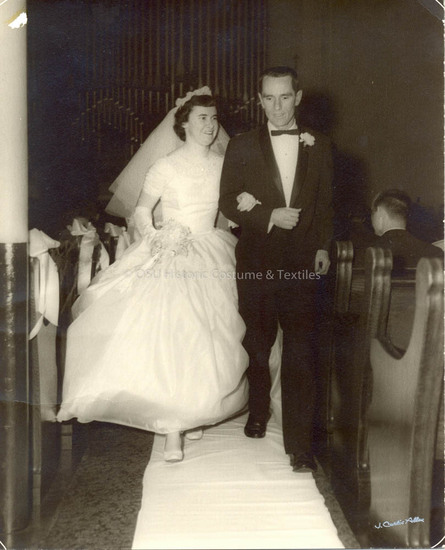 …a full-skirted transparent white dupioni gown over two layers of net and taffeta. Re-embroidered Alencon lace dotted with iridescent sequins and pearls decorates the wide neckline of the elongated bodice and bottom of the skirt yoke. Short gathered sleeves are complemented with dupioni gauntlets. 1957

Rita Jane Elliott wore this dress to her marriage with Lewis David Stethem on March 16, 1957 in Columbus, Ohio.

Rita Elliott was the older of two daughters born to Evelyn Smith and Harold Elliott in Columbus, Ohio on February 21, 1935. Her father was a shoe buyer and department manager for the Schiff Company. He later became vice-president and then president of Cambridge Ltd. Inc.

Rita and Dave, her husband, met in a business law class at The Ohio State University in January, 1956. The class was held in the old Armory building. Dave graduated from OSU in December, 1956 and Rita would graduate the next spring, in June, 1957. They married three months before her graduation.

Rita’s dress was purchased from Madisons, a local Columbus high-end women’s clothing store located on High Street just north of Broad Street. It was a family business that started in the 1920s and grew into a chain of 32 stores by the 1980s throughout the Midwest. Its closest competition in Columbus was Montaldo’s, another women’s boutique that also had a bridal salon, as did Cole of Columbus and Lazarus. Madison’s closed in 1994 due in part to competition from the newly opened downtown City Center Mall.