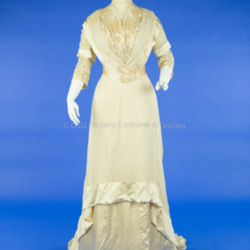 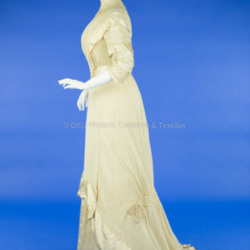 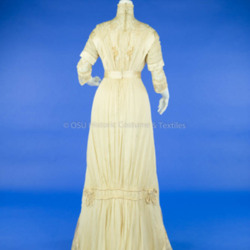 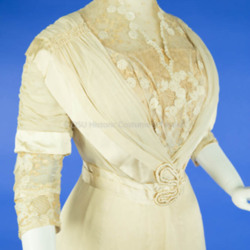 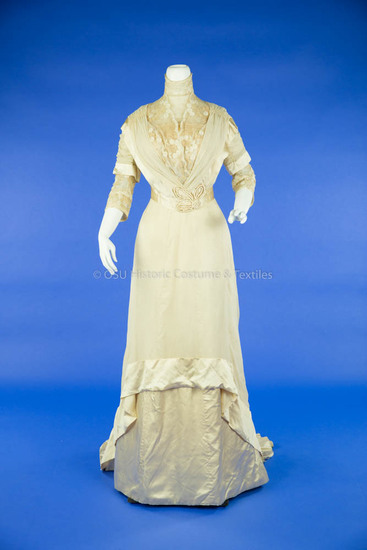 …a cream silk satin gown with gauze overlay pleating the bodice either side of a deep ‘V’ lace insert and high neck, three quarter sleeves with lace undersleeve, pleated silk waistband and satin-edged gauze overskirt, shorter in front, gathers elegantly behind the knee falling into a short train. 1910

Florence Kenyon Hayden wore this dress upon her marriage to James Manard Rector on August 3, 1910. Florence was born in St. Louis, MO on August 22, 1881 to Katie and Horace Hayden. Horace was a merchant who passed away when Florence was only a year old, and the family moved to Columbus, Ohio shortly thereafter. Florence began studying architecture at the Ohio State University in 1901 and completed two years of school before withdrawing to begin her career, which included teaching architecture at the university from 1905-1907. Florence is known as the first licensed female architect in the state of Ohio and was recommended to the OSU Board of Trustees to design Oxley Hall, the first women’s dormitory on campus, in 1907. She ran her business under the name Kenyon Hayden and it is thought that the Board presumed she was a man. Upon learning the truth, the Board assigned her a male partner, Wilbur Mills. In a 1970 interview with The Columbus Dispatch, Florence describes how she became fed up with Wilbur Mills and locked him out of the office. She then submitted the final plans for the dormitory on her own, and they were approved. While both Florence and Wilbur’s name appear on the plans, it is understood that Florence was the principal architect. (To learn more about this project, view WOSU's Columbus Neighborhoods video describing the building of Oxley Hall.) After marrying James Rector, a prominent physician, Florence began to design medical offices for which she gained national recognition. In addition to her work as an architect, Florence was also an important figure in the women’s rights movement of the early twentieth century. She was the financial chairwoman of the National Women’s Party in 1921.