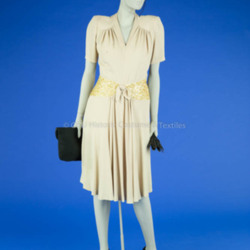 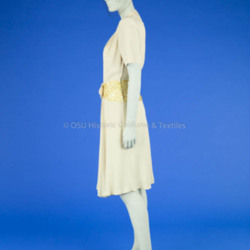 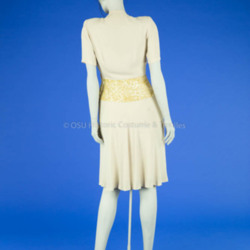 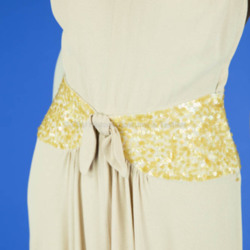 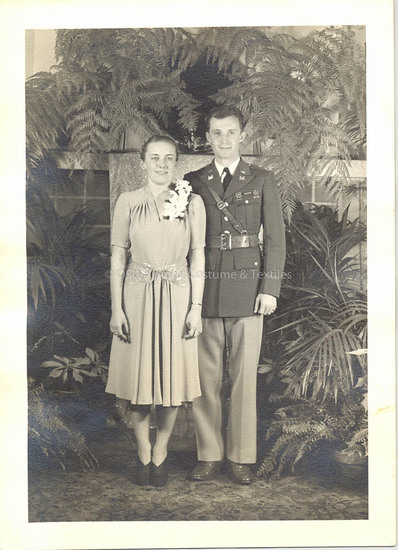 …a blue acetate crepe knee-length dress with ‘V’ neck, short-sleeves and soft gathers below the shoulders. Gentle center front folds of the skirt are topped with a fabric bow drawing together a sequined hip yoke. 1941

Mary Lou Otto wore this dress on the occasion of her marriage to Lieutenant John H. Kime on December 7, 1941.

Mary Lou was born March 10, 1918 in Nebraska to Elizabeth Butler and Roy Otto. Her father, Roy, worked as a laborer and a salesman in a hardware store. At the time of her marriage, Mary Lou was teaching home economics at Connellsville High School in Pennsylvania. She had graduated from that High School, and from the School of Home Economics at West Virginia University in Morgantown.

John H. Kime was born June 11, 1916 in Moundsville, West Virginia. He graduated from the College of Mining Engineering of West Virginia University and had attended Greenbrier Military Academy. At the time of their marriage, John was already an officer in the Army and stationed at Camp Shelby, Mississippi.

Their afternoon wedding took place at 2:00pm that infamous Sunday. It was only a half hour later that the major radio news networks interrupted regular programming, at 2:30pm Eastern Standard Time, to bring news of the Japanese attack on Pearl Harbor that launched the United States’ involvement in WWII.

Mary Lou’s dress is no longer the blue it once was due to the properties of the acetate fiber and the dyes used at the time of its manufacture. We can still see the original color of the blue dress in the rayon hem tape, cotton stitching thread and side zipper tape, and the lining covering her shoulder pads.