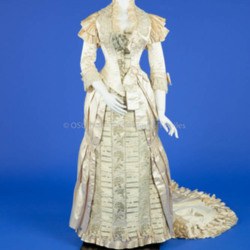 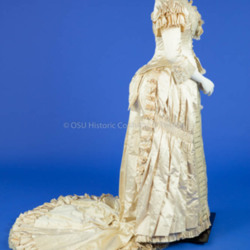 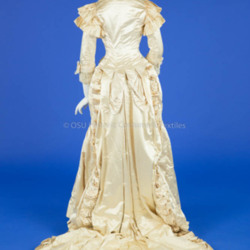 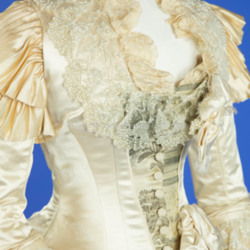 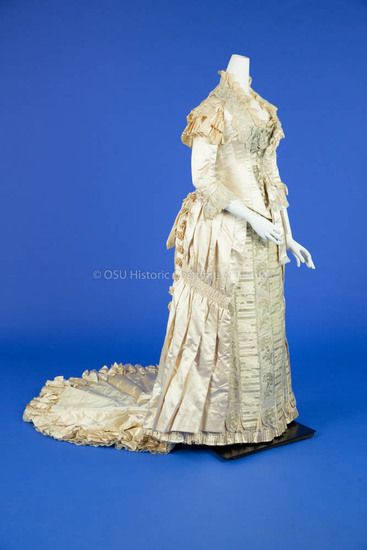 …an elaborate ivory satin gown with bustle and train having a metallic brocade ‘vest’ and front skirt panel; embellishments of lace and bows complement glass bead and pearl trim on silk net around the neckline and wrists. Double pleated ruffles top the sleeves and are repeated under the scalloped hem of the front skirt panel. A softly pleated satin band edges the train which has a dust ruffle underneath of pleated organza and lace. A pair of matching shoes and bonnet completed the ensemble. 1881

Mary was one of two children, and the only daughter, born to Alexander and Evelina McAllister. She was born in Mount Vernon, Indiana on April 27, 1857. Mary’s father was a successful dry goods merchant who owned and operated his own store.

Joseph Glenn Ebersole was born April 26, 1852 in Aurora, Indiana to Dr. Jacob Ebersole and his wife, Frances, the third of six children. Joseph’s father, Dr. Ebersole, was a surgeon in the 19th Indiana Infantry in the Civil War, enlisting for the Union on July 29, 1861. Following the war, Dr. Ebersole gave up his practice as a doctor and moved his family to Cincinnati, Ohio. His father-in-law, William Glenn, owned a dry goods store in Cincinnati and Dr. Ebersole went to work as a grocer. It was here, at Glenn Williams & Sons, that Joseph Ebersole was employed when he and Mary McAllister were wed.

Mary had her dress made at B. Altman & Co in New York and shipped to Cincinnati. She also made use of the phrase, “something borrowed,” by wearing her sister-in-law, Lydia McAllister’s, wedding petticoat, which had been worn in 1877.

Mary and Joseph lived in Cincinnati following their wedding and shortly thereafter, Joseph entered into a partnership in a piano manufacturing company.  Joseph and Mary had four children together and remained in Cincinnati.