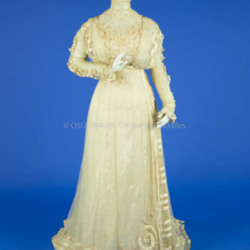 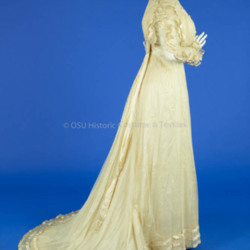 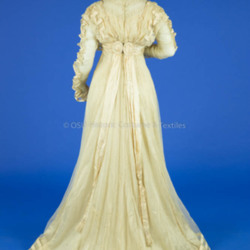 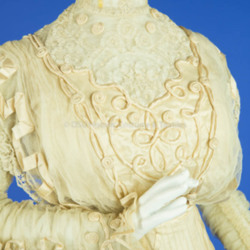 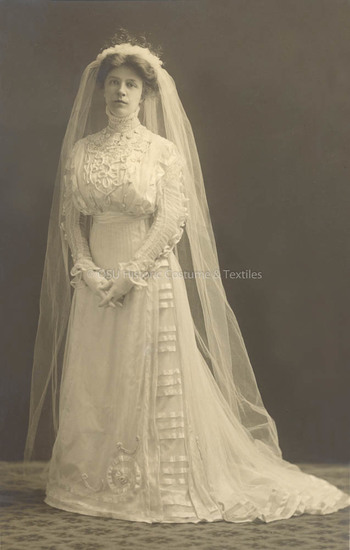 …an ivory silk satin and bobbinet dress with satin piping applique and ribbon trim, having a bodice yoke and collar of Battenburg lace and completely gathered long net sleeves with a satin-edged ruffle along the outer edge merging into wrist ruffles. The high waistline is cinched with a satin cummerbund which closes in back and forms long streamers extending down the back ending in knotted fringe. The net overskirt has hips covered with tiny tucks and is trimmed with vertical and horizontal rows of satin ribbons along the hem and train, and braided satin piping on the lower left of the skirt. 1908

Helen Knopf, married Charles Gibson McKinney on November 25, 1908 in Cincinnati, Ohio in this dress when she was 24 years of age. Helen was the youngest of five children born to Julius and Caroline Knopf, who had immigrated to Cincinnati from Germany. Julius was a cigar maker by trade and prior to her marriage, Helen attended Teachers Training College in Cincinnati, Ohio.

Charles McKinney was two years older than Helen and the second of four sons born to Alice and William McKinney. William was a coal solicitor and later a real estate agent. After Charles’ and Helen’s marriage, they lived with William McKinney before eventually moving to their own home in Millcreek, Ohio, just outside of Cincinnati. Charles worked as a clerk at the time of their marriage and later as superintendent of a factory for several businesses. The couple would have three children.

Helen’s dress was made by Emma Busam, a dressmaker in Madisonville, Ohio, near Cincinnati. Emma was born in 1872, the youngest of Susan and Leopold Busam’s four children. It is unclear when Emma began working as a dressmaker but seems to have had an established business when she made Helen Knopf’s wedding dress. A copy of the receipt for the dress in the amount of $44.49 accompanied its donation to OSU. In terms of today’s dollars the cost would be about $1148.36, still a relatively good price for a custom-made wedding gown.