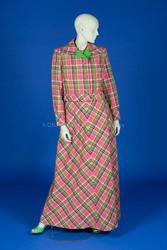 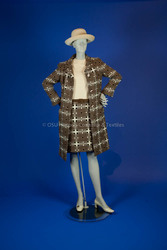 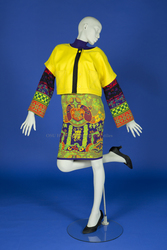 In 1929 Montaldo’s, a high-end ladies’ specialty shop started by two sisters in Independence, Kansas, a decade earlier, opened a branch in Columbus on Broad Street. Given the numbers of extant garments with this store’s labels in HCTC, many well-to-do women in and around Columbus patronized the shop, along with the neighboring Mrs. Eugene Gray. The earliest dated dress with a Montaldo’s label, c. 1930, was given to HCTC by Anita Eisenstein, whose husband, Harold, ran Gallery Players for years. Montaldo’s sold dresses designed by American designers throughout the 1940s, 50s, and 60s. Fran Orndorff worked at Montaldo’s for 30 years, beginning in the 1960s, and was the store’s manager when it closed in 1995. She saw to it that important European designers such as Emmanuel Ungaro and Christian LaCroix, which were added to the store’s offerings during its later decades, made their way to HCTC.