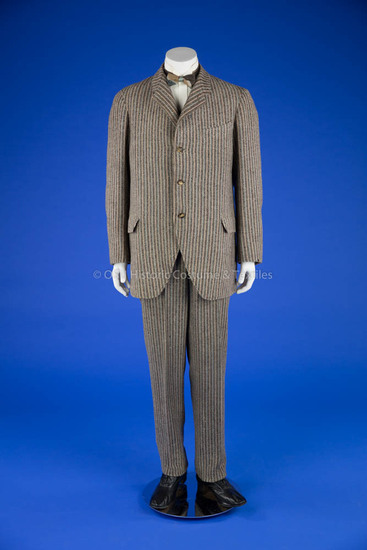 Select above image to link to complete catalog record

The Historic Costume & Textiles Collection owns three men's suits with Columbus, Ohio, tailors' labels in them, and one evening coat with a ladies' tailor label. The earliest documented suit is a three-piece, brown, wool herringbone made for Dr. Joseph E. Barricklow, a dentist with an office on the northeast corner of Broad and High Streets. A label within the suit reads Burns Columbus, O., with a date of December 24, 1903.

The narrowly cut four-button suit was the height of men's fashion at this time, and it shows little wear due to the fact that Dr. Barricklow only had it for two years before he passed away in 1905 at the age of 55. The tweed suit in a multicolored wool, blue, brown, tan, and rose, closes down the front with tortoise shell buttons in the conservative sack style coat of the early 1900s, a hip length coat with a straight back. This is a very traditional suit with all the standard shapes of the time. The waistcoat is double breasted with two columns of four tortoise shell buttons that run down either side of the center front seam, and is faced in a black silk and lined in a white polka dot jacquard with black pinstripes. The matching trousers feature 6 suspender buttons in light brown Bakelite engraved with "+ Burns + Columbus, OH."

According to the Centennial History of Columbus and Franklin County, Ohio, Volume 2, Burns Tailor, located at 74 North High Street, was run by James Henry Burns, an "importing tailor to men and women," who "draws his patronage from among the better class of the citizens of Columbus." The son of a tailor, Burns was born in Zanesville, Ohio and moved with his family to Columbus as a boy when his father, Michael Burns, set up a tailor shop on the corner of Gay and High Streets. After receiving his degree in a "commercial course" from Notre Dame University, James joined his father in managing the tailoring business. In 1894, he established a ladies' tailoring department and was known as the oldest ladies' tailor in Columbus at the time of the city's centennial. Burns Tailor was known as "one of the leading establishments of Columbus, setting the standard for activity in this line in the capital city. 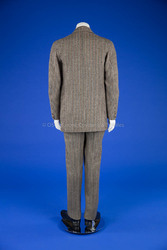 Back view of suit 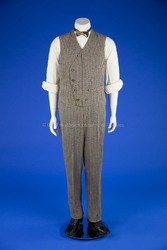