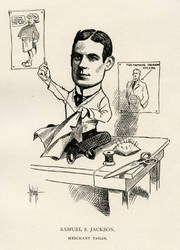 Samuel Sherman Jackson was born on July 20, 1866 in the small town of Beallsville, Ohio. At the age of 14, he went to Bellaire, Ohio to work as a tailoring apprentice, and 3 years later he joined Goodman and Druggan Tailors in Columbus in 1883, designing clothes for the firm until 1900, with the exception of a 6-year period he spent working in the shop of George S. Evans in Zanesville, Ohio. Jackson then went into business for himself, and was listed in 1900 as a merchant tailor working with a boarder named Mary P. Downs, who is listed as a tailoress. In 1910 he is listed as a clothing merchant and in 1920 as a merchant tailor.

S.S. Jackson married his wife, Jessie Jackson, in 1888, and the couple had a son, Paul, in 1899. Paul joined his father in the tailoring business, and the duo purchased Stimson Tailors from William Stimson in 1926, reestablishing the company as S.S. Jackson, Inc. Paul was listed as a tailor in 1930 and also worked as the company's treasurer until his death in 1937. S.S. Jackson continued to work as a tailor until he retired in 1946, with his shop in Columbus located at 126 E. Broad St. for the last 15 years of his career. (Image courtesy of Columbus Metropolitan Library.)

Throughout Jackson's six decades in the tailoring business, he became known as one of America's leading clothing designers. He was a member of the Columbus Custom Cutters' Club and also The Custom Tailors and Designers Assosciation of America for 65 years, and he received numerous awards for his work. Jackson also fashioned a suit for President William McKinley, served as a delegate at the CTDA convention in Paris, and sponsored and designed clothes for the first style show ever held in Columbus in 1900. He established a "Jackson Fund" for the benefit of young designers in 1951, and passed away the following year at the age of 86. 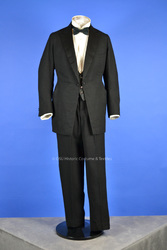 Boyd G. Martin acquired a tuxedo from the S.S. Jackson tailors in October 1928, likely as a wedding gift, along with a black silk striped vest, and a black wool tailcoat and pair of pants from the same company, from his older sister Winifred M. Jackson, who was married to S.S. Jackson's son Paul. The label in the tuxedo reads S.S. Jackson, Inc., Successors to Stimson Tailors. Columbus, O. The jacket of the charcoal-grey wool suit features silk notched lapels and the trousers have a chevron braid down the side seams.