The Historic Costume & Textiles Collection also owns a formal suit produced by B. Frosh & Sons in 1905 for Daniel Webster Williams. Bennett Frosh, the owner of the tailoring business, was one of many Jewish tailors in Columbus at the time. Born in Germany on December 25, 1846, Frosh immigrated to America in 1866 and settled in Newark, Ohio. He travelled to South Dakota in order to prospect for gold before returning to Newark and subsequently moving to Zanesville, Ohio, where he took up his trade as a tailor. Frosh came to Columbus in 1895 and established his business at 204 N. High Street, operating variably as "Frosh" or "B. Frosh". He and his wife Kathryn, who died in 1911, had ten children, and one of their sons, Louis, joined the firm in 1905, which is when the name changed to B. Frosh and Sons. The business operated in Columbus for 25 years and Frosh advertsiements regularly appeared in Ohio State football game programs. Throughout his life, Bennett Frosh was a prominent member of the Democratic Party and was also involved in several fraternal and Jewish organizations until his death at his home in Columbus on March 21, 1925 at the age of 78. (Image courtesy of the Ohio Jewish Chronicle.) 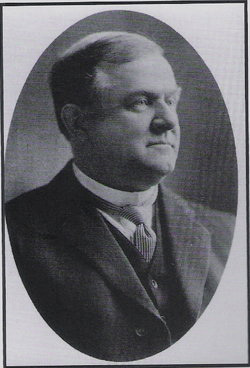 Daniel Webster Williams, whom Frosh created the suit for, was born in Jackson, Ohio on Oct. 31, 1862. While practicing law from 1886 to 1889, Williams discovered his love for writing and subsequently purchased the Jackson Sun Journal, which he owned and edited from 1889 to 1923. He also published the first official history of Jackson County in 1900, entitled "A History of Jackson County, Ohio." Once he became a noted journalist, Williams was then appointed by President Theodore Roosevelt as the American Consul to Wales, where he served from 1905 to 1907. Williams was of Welsh descent, and his father, Benjamin Williams, emigrated from the country in 1839, so Daniel was likely very familiar with the language and culture of the country. Throughout his time as counsel, he attended several formal state functions with President Roosevelt and prominent Welsh leaders where this suit from Frosh would have been required attire. Upon his return to Ohio, Daniel was elected to the Ohio Senate as a Republican, where he served from 1908-1912, and unsuccessfully ran for governor in 1922. Williams remained active in local organizations and wrote a regular column for the Columbus Citizen, "Under the Open Sky," until his death on July 8, 1932 in Columbus. He was married to Sarah Marshall Ames on Jan. 6, 1887, who was a member of a notable Southern family and whose uncle was General James Longstreet of the Confederate Army. She lived from 1867 to 1959 and the couple had four children. (Image courtesy of Jackson County, Ohio historian Robert Edgar Ervin.)

The suit worn by Daniel Webster Williams contained a black wool tailcoat, vest, and trousers. The label on the inside right breast pocket of the tailcoat contains a picture of a frog and reads B. Frosh & Sons Columbus, O.

Advertisements below for the Frosh tailoring business from Ohio State football programs. Images courtesy of The Ohio State University Archives. 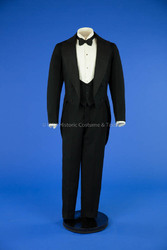 Select above image to link to complete catalog record 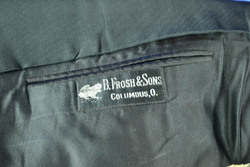 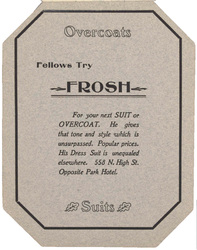 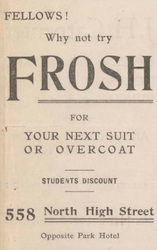 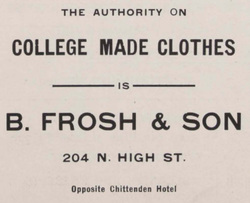