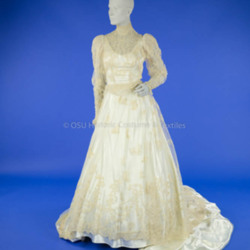 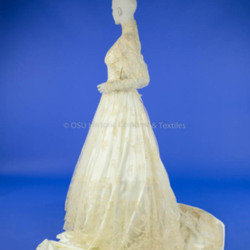 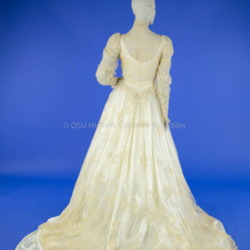 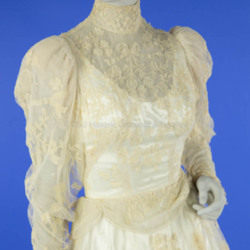 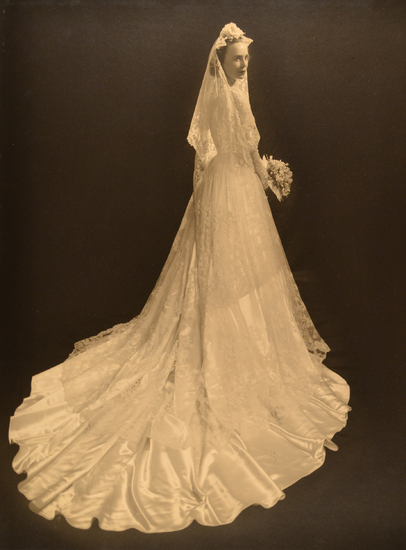 …a high neck gown with peplum made from her grandmother’s 1881 lace wedding dress with long lace leg of mutton sleeves with button and loop closures at wrist. A modern longer trained satin underdress with low scoop neckline was added beneath, as was a modern hooped petticoat with a pale blue ribbon sewn to the lower left side. 1951

This dress was made from lace that was originally part of a wedding dress worn by Maude Tomlinson. Maude married Dr. William Sly Hoy on November 8, 1881. She was born in 1866 to William Henry Tomlinson and Ellen Barnett, one of six children but only one of three who survived into adulthood. Her father was a lawyer originally from Ohio but had moved to West Virginia to practice law.

Dr. William Hoy was born in 1856 to Charles W. Hoy and Carrie C. Taylor. Dr. Hoy was the manager and chief surgeon of Hoy's Hospital in Wellston, OH, and acquired the nickname of "poor man's surgeon". He served as President of International Railway Surgeons as well as the President of the Ohio State Board of Education. Their granddaughter, Harriet Hoy, would reuse the lace from Maude’s dress for her own wedding gown in 1951.

Harriet Hoy was born May 14, 1915 in Columbus, Ohio to Carl D. Hoy and Marjorie J. Tyler. Like his father, Carl was a surgeon who worked in a local Columbus, Ohio hospital. Harriet attended the Columbus School for Girls and Sarah Lawrence College where she studied music and dance education. On June 5, 1951, Harriet married Kirke P. Lincoln Jr. at the age of 36. Shortly thereafter, Harriet and Kirke moved to Cleveland. Kirke worked as an assistant cashier at Central Bank National Headquarters. Unfortunately, Harriet and Kirke divorced in 1963 after 11 years of marriage. Harriet continued to live in Shaker Heights, near Cleveland, until her passing in 1993.