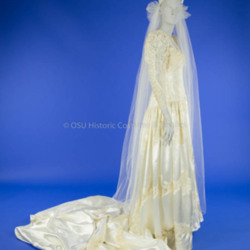 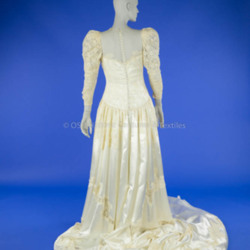 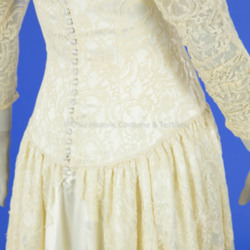 Satin and lace wedding dress, 1943 detail of back. 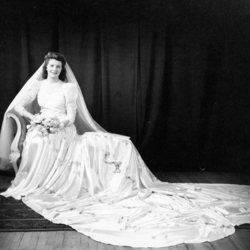 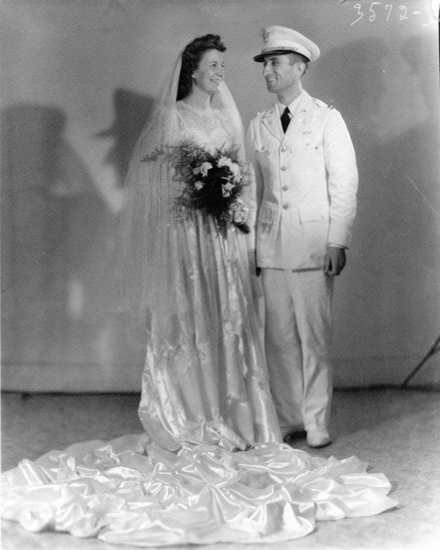 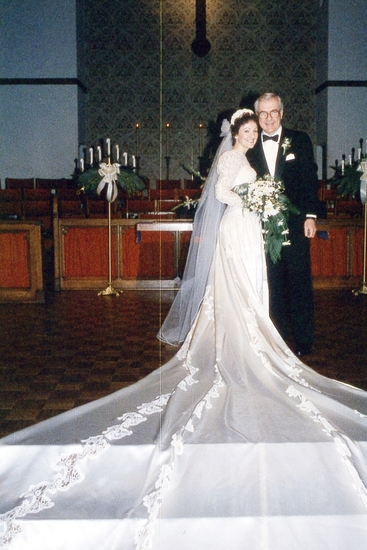 …a cream satin and lace gown with sheer fabric over a sweetheart neckline and ¾ length lace leg-of-mutton sleeves. Thirty-six covered buttons fasten the back of the dress, which has a lowered waistline and a remarkable cathedral train with lace insertions which extends eight feet beyond the hem. 1943

This dress was first worn by Nelly Ann Ricci in 1943, and later by her daughter Ann Marie Salimbene in 1987 without alteration.

Nelly Ann Ricci wore the dress upon her marriage to Lt. Col. Rocco Carmelo Salimbene on September 18, 1943 in Camp Shelby, Mississippi where he had recently been stationed.

Nelly was born on October 12, 1919 in Columbus, Ohio to Mary and Tullio Ricci. Mary Ricci was born in Ohio, and Tullio had emigrated to the U.S. from Italy. While he originally worked as a car repairman for a railroad, he eventually opened his own men’s tailoring business. Later in his career, he worked as a tailor at The Union department store in Columbus.

Rocco Salimbene was born on February 22, 1913 in West Virginia to Mary La Neve and Joseph Salimbene, who had immigrated in 1903 and worked as a machinist. Rocco is an Ohio State University alumni who joined the Army in July, 1940 and was released in January, 1947. After the war Rocco was a mechanical engineer.

It is unusual to find a dress with so much fabric in it during WWII. Order L-85, first announced in 1943, dictated that only one and three-fourths yards of fabric be used per dress. However, the wedding dress industry lobbied for an exemption, arguing that the white wedding tradition was one of the things the soldiers were fighting for and it was important to the overall morale of American citizens.

Rocco and Nellie’s daughter, Ann Marie Salimbene, would wear her mother’s dress unaltered when she married on December 5, 1987. Her headpiece and veil, however, were something new.

Donated by the bride and first bride’s daughter, Ann Salimbene