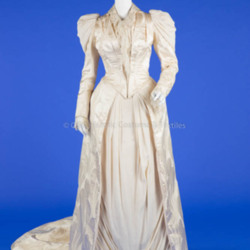 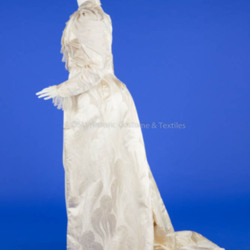 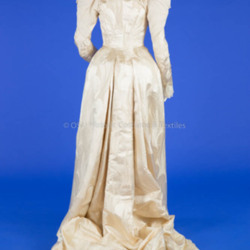 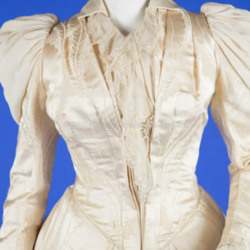 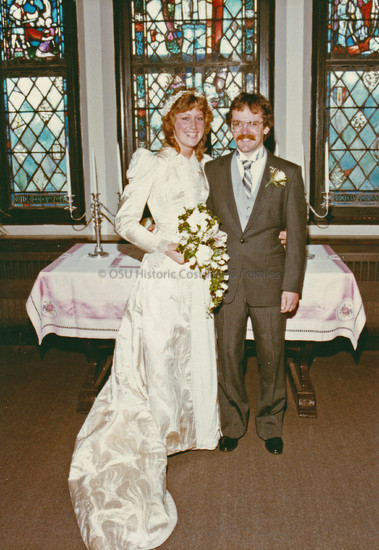 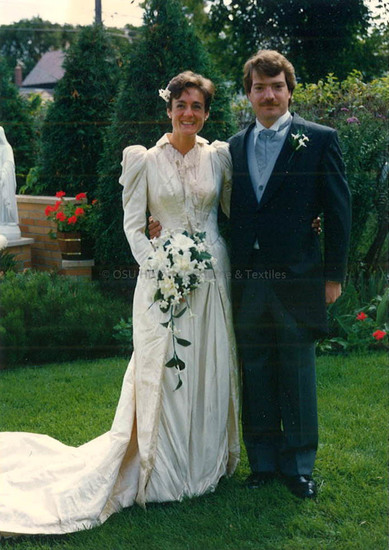 …an off-white silk jacquard and crepe gown with long train, leg-of-mutton sleeves and a lace jabot peeking out from an open collar and repeated at the wrists. The dress recalls elaborate styles worn at 18th century European courts with its white jacquard outer robe covering a crepe underskirt. The outer dress fabric is similar to those used by Charles Frederick Worth, grandfather of Parisian haute couture. 1891/1984/1986

Mary “Minnie” Knox was born July 14, 1864 in Wisconsin to Eliza Babcock and Samuel Goodhue Knox, the elder of two daughters. Minnie’s father was an entrepreneur who opened a country store and a gristmill before entering the lumber business. He was very successful, with mills in both Wisconsin and Minnesota, and his daughter was able to have a Chicago dressmaker, Josephine Chesley Hodges, make her wedding dress.

Andrew Kreutzer was born August 30, 1862 in Germantown, Wisconsin to Andrew and Caroline Kreutzer. At the age of 14, Andrew was apprenticed to a man who specialized in saddlery. He tired of this line of work, however, and left to teach school from 1884-1888. Andrew then enrolled in law school at the State University in Wausau and was admitted to the bar in 1890. He began his law firm soon thereafter and was prominent in state politics for many years. Andrew and Minnie had four children, two of whom lived to adulthood.

Mary Ruth Wilson and Sarah Stringer Wilson are great-granddaughters of Minnie Knox Kreutzer. They wore Minnie’s dress for their own wedding ceremonies before changing dresses for their receptions. Minnie’s dress did not undergo any alterations for either of the subsequent brides and remains in its original condition.