Advice and Advertising to the College Student 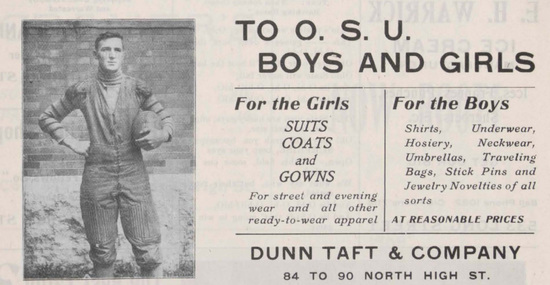 Clothing manufacturers and retailers identified college students as a unique market very early. Stores, such as Lazarus, even began their own departments specifically for the female undergraduate as early as 1926. Advertisements for local tailors and men's stores can be found in football programs as early as 1908. College students represent a unique stage of life, where young men and women are often living away from home but are often not yet fully independent. Advice for how to dress in college came from many sources, but for Ohio State female undergraduates there was advice mailed directly to their homes. A booklet was sent to each incoming female student which explained their automatic membership in The Women’s Self-Government Association. While there were rules for men in terms of what could be worn to the dining hall when living in the dorm, there weren't any guidelines for clothing other than that. This portion of the exhibit examines both the advice and advertisements directed to college students.