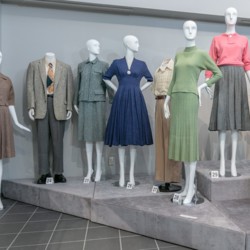 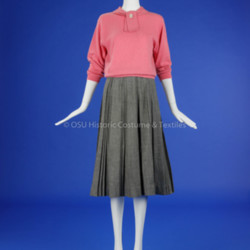 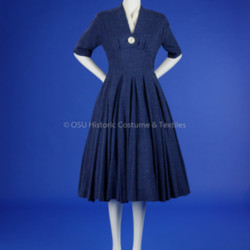 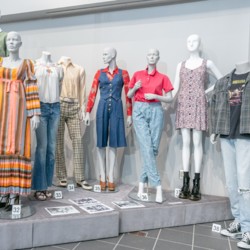 Campus life changed following World War II. The war had re-shaped opportunities for women and the GI Bill made it possible for more men to attend college than previous years. Between 1946 and 1948 almost one half of college students nationwide were veterans.* Often older and married, this new demographic challenged the thinking of who had the right to a college education.

Conservative fashions, as a carryover from more somber times of the Great Depression and the war, resulted in iconic looks of plaid skirts, sweaters and saddle shoes for women throughout the 1940s-1960s. Men wore dress pants and sport coats but not everyone wore ties to class and by the 1960s sport coats were seen less and less. Words like “teenager” came into the English vocabulary and the focus on young people and their interests grew stronger as the baby boomer generation arrived on campus.

Along with the baby boomers came political activism in the form of support for civil rights and against the Viet Nam war. General rebellion against previous generations appeared in more casual fashions, with long hair for both men and women, and facial hair for men. Blue jeans, once appropriate only for dormitories, appeared all over campus, replacing dress pants for men and skirts for women. Embroidered and patched bell-bottoms of the 1970s gave way to printed preppy jeans of the 1980s. These in turn surrendered to anti-establishment grunge jeans with purposely torn knees and seats, which took years of wear to achieve, by the 1990s.