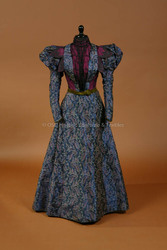 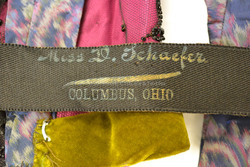 Daisy, first appears as a dressmaker in the city directories in 1887. She resided with her family in the old South End, on Briggs Street near Beck Street in the present day German Village neighborhood. She works on and off with her older sister Nettie while still living at home for several years, and partners with Nellie Schatzman in Schatzman & Schaefer starting in 1891. The business is located on E. Town and Fifth Streets, a fashionable neighborhood, but relocated to the YMCA building in 1892. Three years later, Daisy has her own shop at No. 27 Columbia Block while still living on Briggs St.

The D. Schaefer dress in the HCTC dates from this late 1890s time period and is of exquisite craftsmanship. It is a watered silk paisley print two-piece dress in colors of purple, pink and green. The bodice is accented with bright magenta taffeta covered with black netting trimmed with black glass beads. The leg-of-mutton sleeves, which create a very fashionable broad shouldered silhouette, are finished with a narrow band of green velvet that is repeated in a small waist sash. The dress was purchased by Mrs. John E. Brown, nee Fannie Barker. She was born in McConnelsville in 1868 where her father Charles ran a successful dry goods business that had been around since 1825. Fanny’s ancestors relocated from New England to Ohio and were active in the abolitionist, temperance and women’s suffrage movements in the mid-19th century. She married in 1889 and moved to Columbus with her husband, a noted doctor of otolaryngology (ear/nose/throat). Fanny would have been about 30 years of age when she purchased this dress from Daisy Schaefer. Her waist was still small as her first and only child was not born until 1904 when Fanny was 36 years of age.

In 1899, Daisy and Nettie Schaefer move with their mother to 145 Cleveland Avenue where the business listing is under Nettie’s name. A year later they are joined by their older sister Louise, also a dressmaker, and have a phone number listing in the city directory. From 1907-1915, Daisy is listed without Nettie, and by 1915 has returned to a fashionable E. Town Street location. Sometime between 1920 and 1930, Daisy and her sisters, now in their fifties, move to San Diego, California where they live out their years as dressmakers.