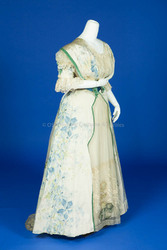 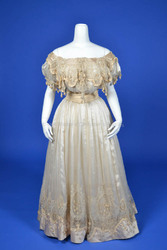 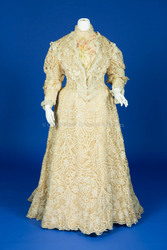 Kate Hoffer opened her dressmaking business in 1899 at 1409 N. High St. Her husband Frank was then working as a barber. By 1901, the dressmaking business listing was under Frank’s name. It must have been a more lucrative business than barbering, because by 1902 Frank was listed as a tailor. By 1910 the business was located at 256 Oak St., while the Hoffers resided on fashionable E. Broad St. at number 1039--with Frank listed as a dressmaker and Katie as a ladies tailor.

Like, Daisy Schaefer, Kate was of German descent. Born in West Virginia in 1861, she was seven years older than Daisy. She married Frank in 1884 and had two daughters who were 16 and 13 when the dressmaking business opened. The Historic Costume & Textiles Collection owns three dresses with Kate and Frank Hoffer’s label. Two of the dresses have the label printed on a binding that doubles as the skirt’s waistband. The third has the name printed on the waist tape of the bodice.

The first two dresses were donated by Mrs. Bruce Harris, who is the granddaughter of Thomas Clarence (T.C.) Heisey, youngest son of the founder of the Heisey Glass Company in Newark, Ohio. The dresses most likely belonged to members of the Heisey family. TC had two daughters, Emma and Alice who were in their early to mid twenties when these dresses were made between 1903 and 1906. One is a warp printed silk, blue flowers on white and the other is a white China silk trimmed with ribbon flower ‘fringe’. The white dress has a waist significantly smaller than the blue/white dress indicating that these dresses were most likely worn by two different women. Both dresses have low necklines and elbow length sleeves, indicating that they were both worn for an evening occasion such as a dinner or dance.  r dress in the HCTC was definitely a wedding dress, made almost entirely of lace over silk taffeta with a chiffon layer sandwiched in between. This dress was worn by Lucile Joyce on the occasion of her wedding to James Edward Hagerty October 26th, 1907. Dr. Hagerty had been a professor at Ohio State University for six years at the time of his marriage and would have a long and illustrious career with the university. They had five children together.

Lucile was the daughter of John Joyce who immigrated to the United States in 1851 and was the founder of the Green-Joyce Company. It was a highly successful dry goods business that began operation in 1884. Sadly, John Joyce died of a heart attack shortly after his daughter’s wedding in January of 1908. After his passing, the Green-Joyce Company continued to operate until 1929, when it became a victim of the stock market crash.