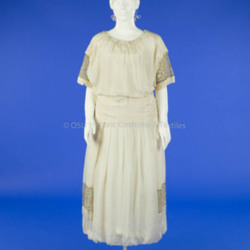 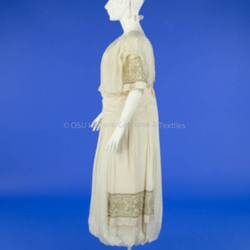 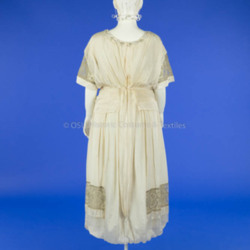 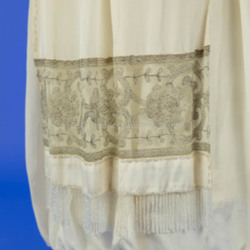 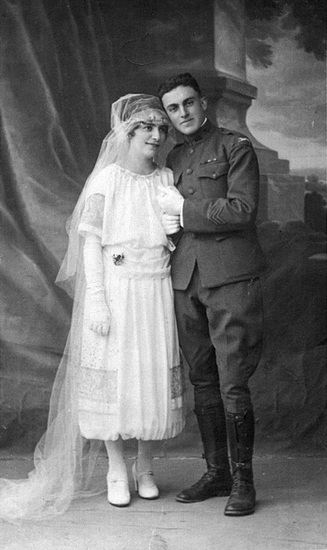 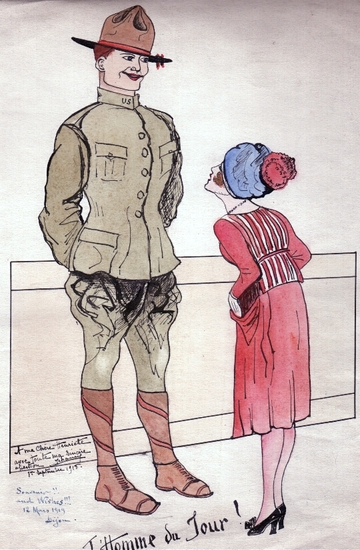 Henriette Séroi wore this dress upon her marriage to PFC Colin Wilford Robertson on August 21, 1919 in Auch, France. Henriette was born in Versailles, France on March 12, 1896. Her father served with the French

Army during World War I and in 1917 was transferred south to the village of Auch, due west of Toulouse in southern France. During the war Henriette volunteered with the Red Cross and helped look after her younger siblings. She also studied music and English. Her brother René married Jehanne Perchet in Dijon in 1918. Jehanne was an instructor of modern languages as well as a talented artist. She drew a cartoon of a young French girl gazing up admiringly at a tall American soldier and titled it, “L’homme du jour!” (The man of the day!) Henriette visited them in March 1919.

Private Colin W. Robertson was born July 3, 1987 in Newton, MA. He was not yet 21 when he landed in Brest, France as part of the American Expeditionary Forces in 1917. His Company spent the next six months doing roadwork and digging trenches and latrines—not very glamorous work, but he spent his time mastering the French language. When interpreters were needed, he applied for the assignment and became an Army Field Clerk and was sent to Paris in 1918 to work with the Postal Express Service. He eventually got a permanent assignment on the Paris to Dijon mail run. On his first Dijon trip, he travelled with the person he was replacing, George Axtell, who was also visiting friends René and Jehanne Séroi, who George thought Colin would enjoy meeting. Colin met Henriette at this time and was smitten. As it was soon to be Henriette’s birthday, Jehanne gave her the cartoon she had drawn as a birthday gift.

Colin wrote Henriette’s father, asking permission to write her and eventually visit in Auch, and so began their long distance courtship. The marriage announcement was posted in July, and with little more than a month before the wedding, fabric was procured from Paris for the dress and Colin was charged with shopping for Henriette’s wedding slippers at Galleries Lafayette.

The couple decided to go the United States so Colin could take his discharge from the army and had intentions of returning to live in France. However, their son Jacques was born a little over a year later in Seattle, WA, in October 1920, followed by daughter Mariette in 1922. Henriette returned with her children to France by passenger ship in 1924, and the entire family made the trip again in 1935.

Headpiece designed for the exhibition by Jennifer Brown of Romance Studio