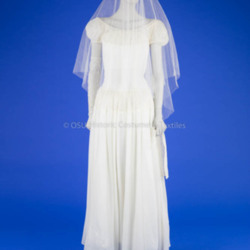 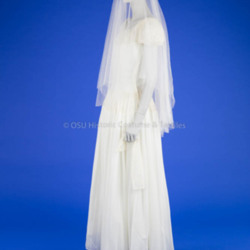 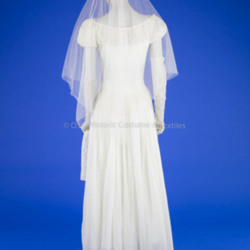 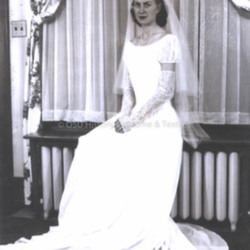 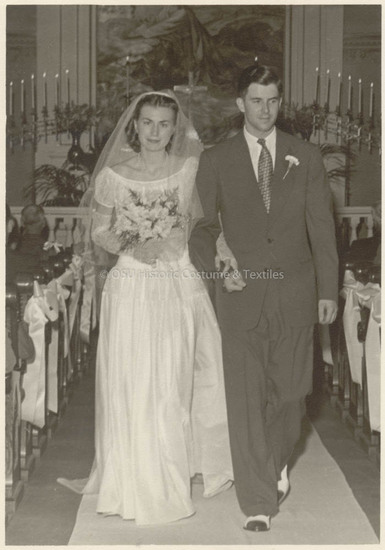 … a white nylon gown that was once parachute with a wide ballet neckline and yoke, short sleeves of lace. A lace yoke also topped the gathered skirt, 1946

Marian F. Schold wore this dress for her marriage to Robert L. Bush on June 29, 1946. Marion was born on February 28, 1924 in Muskegon, Michigan to Esther and Helgie Schold, who had emigrated from Sweden in 1906 and worked in a factory.

Robert Bush was born on May 10, 1923 also in Muskegon to Jacob and Elizabeth Bush. Jacob, the son of a farmer, was a laborer who worked as a railroad motorman, painter, and machinist throughout his lifetime. Robert was a staff sergeant in the 474th Fighter Group, 9th Air Force during WWII. He was given a parachute that was damaged when someone broke into their supply room in France, as it was deemed no longer usable. He carried it in his footlocker throughout France, Germany and Belgium until his return to Michigan in December of 1945. He intended to have a wedding dress made from it for his bride-to-be.

The parachute was spread out in Marion’s backyard and they cut out all the panels with writing on them. The rest they gave to a dressmaker who made the gown for Marion as a wedding present. Marian later cut off the train in order to use the dress as a formal for dances. Living on $90 a month from the GI Bill of Rights didn’t provide any money to buy formal dresses.

Marion and Robert lived in Muskegon after their marriage until Robert began studies that fall at The University of Michigan in Ann Arbor.

“After celebrating 53 years of marriage, Marian died on November 8, 1999. It is with a great deal of joy that I donate this wedding dress to the Historic Costume & Textiles Collection at OSU.”   –Robert L. Bush, October 26, 2000