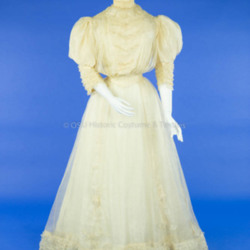 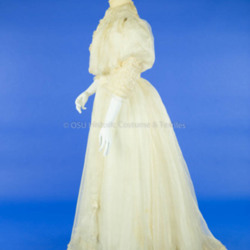 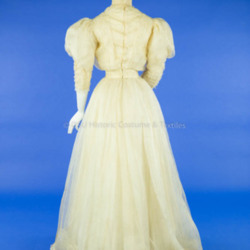 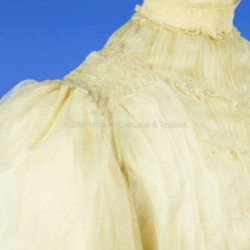 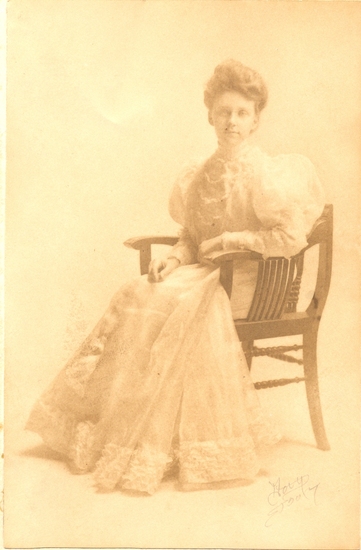 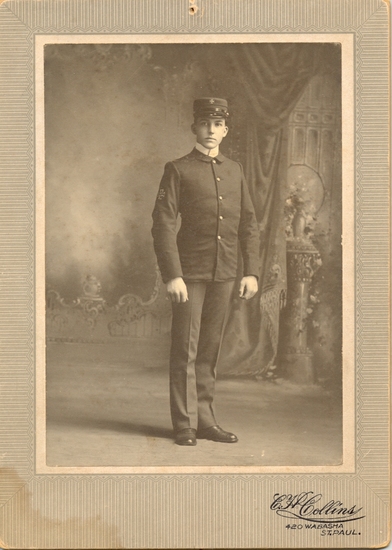 …an hourglass shaped dress with a pigeon front bodice having a high neck, vertical pin tucks trimmed with lace and full leg of mutton sleeves. The wide A-line gored skirt has two long streamers ending in a knot and a hem of six rows of small ruffles. The dress is made from diaphanous pineapple cloth brought back from the Philippines by the brides’ brother, and has an underdress of silk. 1905

Edith May Knapp wore this dress upon her marriage to Luther Marsh Berry November 29, 1905. Edith was born in Smyrna, Michigan on December 6, 1882 to Janett Hayes and Eliud Knapp, who was a traveling paint salesman until he began his own paint manufacturing company.  Edith was the only girl of five children in the family. One of her older brothers, Clyde, brought the pineapple cloth used in her wedding dress back with him from the Philippines. Clyde (pictured below) had been stationed in the Philippines as part of the Army during the Spanish American War.

Luther (Louis) Marsh Berry was born in Orleans, Michigan on February 10, 1873 to Emaline Babcock and Leander Berry, one of seven children. He was 11 years older than his bride.

Lou and Edith did not have a lot of money when they married. They moved in with his uncle after their marriage, eventually inheriting that house. Lou worked at his father-in-law’s roofing paint company, E.J. Knapp & Co. as a manufacturer, while Edith herself worked as a bookkeeper in a dry goods store before their children came along. Edith and Luther would have two children: Austin Luther Berry and Jeannette Berry Brubaker. Edith remained a homemaker until she was in her late 50s or early 60s when she went to work for the Belding Banner News in Belding, MI where she wrote a local column for more than 20 years. She and Luther were married for 54 years prior to Luther’s passing in 1966. Edith would pass away in 1969.