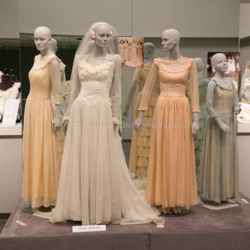 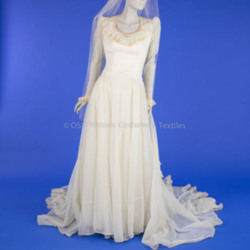 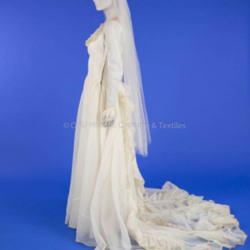 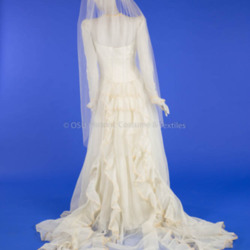 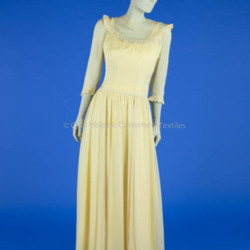 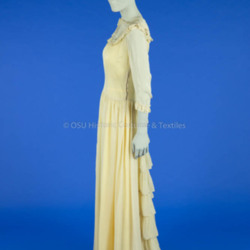 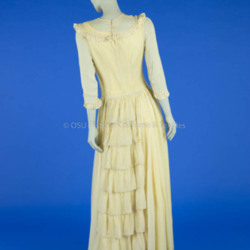 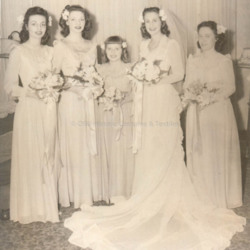 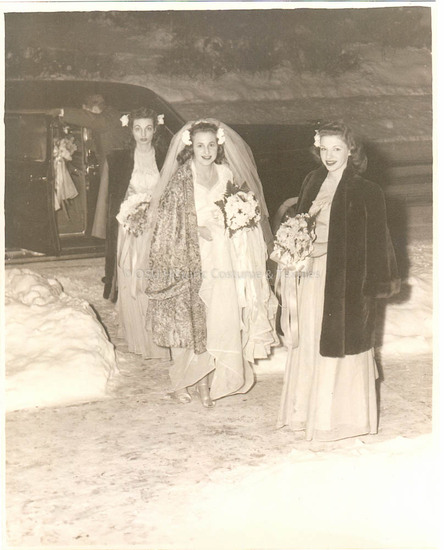 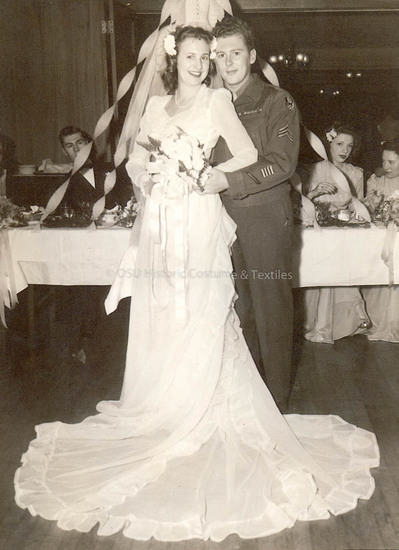 …a sheer white rayon gazar gown over taffeta with sweetheart neckline, long sleeves, a dropped waist and train. The neckline and sleeves are finished with lace and a lace-edged ruffle. Similar layered ruffles accent the dress’s long train. The bride was accompanied by a rainbow of bridesmaids. 1945

Doris Fyfe was born in New Jersey on March 30, 1923, the oldest of Edward and Hilda Fyfe’s three girls. Her father was an accountant and later a bank president.

David Thomas was born January 29, 1922 in New Jersey to William and Mabel Thomas. William was an electrical equipment salesman.

Doris and David met in high school and began dating at the age of fifteen. Their romance continued through high school until David enlisted in the army for World War II. They became engaged while he was deployed during the war so Doris planned the wedding under the assumption that they would marry whenever he had leave and was able to come home. David sent money for Doris to buy herself an engagement ring with his mother. When she chose a ring, she had a professional photograph taken of her hand and sent to him overseas.

It was some time, however, before David was able to come home for his wedding. He served in Guatemala during the war, working with military records, and although the war officially ended with the surrendering of Japan on September 2, 1945, he could not get stateside until December. This was probably due to the amount of records that needed processing before he was allowed to go home. Since Doris had to plan a wedding that could happen at any time, her gown of lightweight fabric and open-toed shoes might seem inappropriate for a winter wedding.

The bridesmaids’ dresses shown with Doris’ wedding dress were worn by her sister Carol (peach, maid of honor) and her cousin, Marian Karch (faded, formerly blue). The smaller junior bridesmaid dress (green) was worn by her youngest sister, Marilyn. The fourth bridesmaid was a friend of the bride. The male attendants included the groom’s brother, Russell Thomas, a friend in the Marines, Herbert Conant, and another friend in the Navy.

Following their wedding the couple lived with Doris’ parents until moving into their own apartment in nearby Ridgefield Park, NJ and later their own home in Maywood, NJ. David attended NYU on the GI Bill and was an accountant and later worked in insurance. Doris and David were happily married for 28 years until David’s passing in 1974.