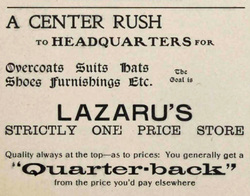 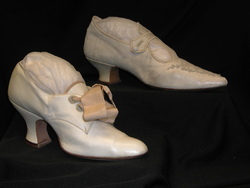 During the 1880s the F. & R. Lazarus & Co. store became the biggest in Columbus and the largest in central Ohio. Fred and Ralph Lazarus were known far and wide as the “square-dealing clothiers.” Lazarus was still exclusively a men’s and boy’s clothier in 1907 when the new listing of “Department Stores” appeared in the city directory. The family-run operation was on the verge of a major change however, in step with the changes in the industry. Fred and Ralph had purchased a piece of property on the northwest corner of Town and High Streets, directly opposite their existing store, and were in the process of building a new six-floor building that was to sell “everything ready to wear” including women’s fashions. 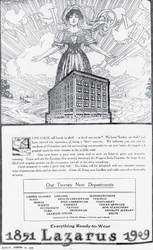 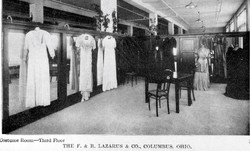 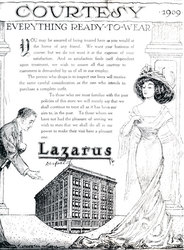 When the store opened in 1909, the volume of sales almost doubled that of the previous year. The new store was such a success that additional merchandise and departments were added in 1911 and 1914, and a bargain basement was added in 1917. It would not be listed as a department store until 1920, however, when there were 12 other department stores in the city. 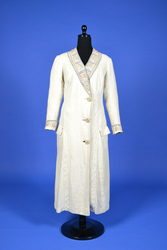 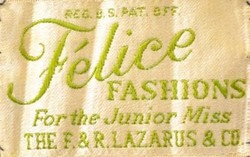 In the 1920s the F & R Lazarus & Co. store opened its “Collegienne Shops” in response to newly recognized needs of younger female customers. One of the first Lazarus specializations for women, the Collegienne Shops offered coats, suits, dresses, lingerie, shoes, and sportswear in junior sizes for a more youthful body type.

The duster (pictured to the right in the top row) is one of the earliest pieces of clothing the HCTC has with a Lazarus label attached. Lazarus’ first foray into providing goods for women and girls came in 1887, when the store that sold only men’s and boy’s clothing added a family shoe department. The duster belonged to Irene Lewis and dates to the time of her marriage to Arthur King in 1912. One of Arthur’s jobs was that of purchasing agent for an automotive body company, perhaps giving him access to an automobile. He also worked as a ceramic engineer and bank appraiser in his lifetime. This duster is not of the same high quality material and construction as Blanche Truesdell’s, perhaps indicating a lower price.

The second and third earliest garments with Lazarus labels in HCTC are from the 1920s. This was a decade when the quality of readyto-wear improved greatly and women with little income could buy clothes that looked like those of a wealthy woman. This is obvious when comparing beaded dresses found in Ohio State’s collection from both Lazarus and Mrs. Eugene Gray (see the Mrs. Eugene Gray section for more detail).