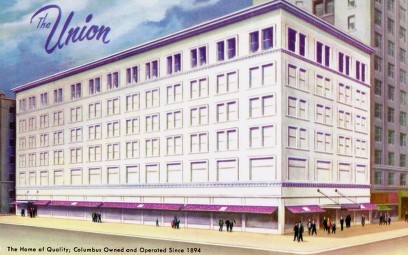 S.M. Levy, listed in various documents as Solomon, Sol, or Samuel, came to Columbus from Chicago on the invitation of Governor William McKinley to set up a store. Levy opened The Union in 1894 as a gents’ furnishings shop, adding women’s cloaks and dress goods during the 1910s. The store was in a white building that was a landmark at the corner of High and Long Streets for decades. In 1968 The Union moved into a location across from Lazarus and remained there until 1980. The store would eventually be razed to create the City Center mall. Sol’s daughter, Fran, would eventually marry Allen Gundersheimer, the founder of The Fashion. 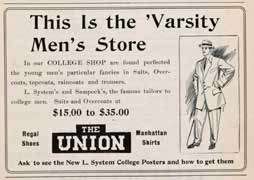 By mid-century, Columbus boasted 133 department stores and specialty clothing shops for both men and women. By the 1950s Columbus achieved an all-time high of 159 apparel stores listed in its city directory. Although the majority of stores were still located downtown, some stores began to branch out into suburban neighborhoods following their customers’ move out of the city. The Union had branch stores on Lane Avenue, near the university, north of downtown, and in the Town & Country shopping center east of downtown. Town & Country was developed by Dan Casto in 1949 as the first shopping center in America—another first for Columbus. In the 1960s, the trend to move out of downtown continued. The Union opened two more stores, one in the Graceland shopping center and another in the Northland Mall. The Fashion closed in 1968 and The Union moved its downtown store to that location across from Lazarus. The Union (and The Fashion), department stores that competed with Lazarus on High Street for Columbus’ retail dollars for the next several decades following the 1920’s.