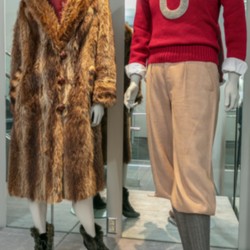 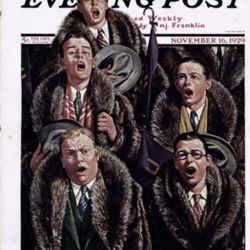 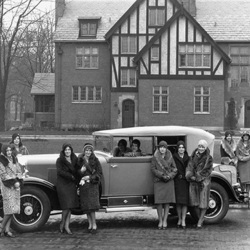 The first Ohio State University home football game was held on a field in German Village on November 1, 1890, but by 1898 the team was playing on the OSU campus, at the corner of High and Woodruff, on Ohio Field. A campaign to build a stadium was begun as early as 1915, and planned as a gift for the University’s 50th anniversary. The “Shoe” opened in 1922 at a cost of just over $2 million. It was formally dedicated at the OSU-Michigan game on October 21, 1922 with 71,385 fans in attendance. The largest attendance on record occurred when OSU played Michigan on November 26, 2016, in which 110,045 fans packed the stadium.

During the 1920s, long raccoon fur coats became a fad among young men and women, particularly those in college. Animal fur had long been a popular material for winter coats, and raccoon fur was a relatively inexpensive option. Additionally, the bulky style of these coats were popular for wearing to football games not only because it was warm, but also because a flask could easily be hidden in its bulk during these years of Prohibition.The style would more or less disappear by the 1930s, due to the Great Depression. The raccoon coat on display in this exhibit was purchased at The Union.