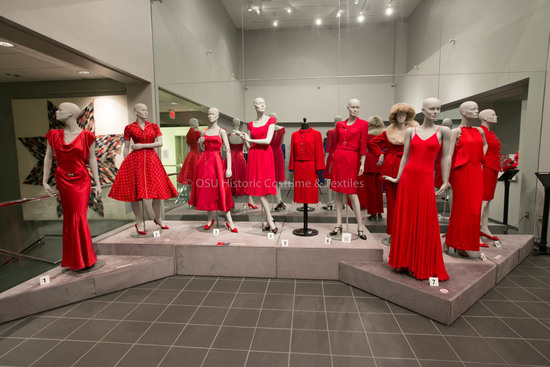 “Emphasis on red has been found to be associated with either of two extremes: (a) feelings of affection and love; (b) feelings of aggression and hate.”

Red is one of the oldest colors, present in the first cave paintings of the late Paleolithic period. Sometime between 6000-4000 B.C.E. (Before Christian Era) humans began coloring cloth. All of the oldest known textile fragments we are aware of were dyed in shades of red. Across continents and cultures, the three most prevalent colors were red, black and white. While blue, yellow and green were available before the European Middle Ages, they did not achievethe same popularity until the middle of the 12th century.

Color is a natural phenomenon, but once in the hands of artists, religious leaders and social leaders, its meaning begins to develop and transform. While cultural meaning associated with particular colors does experience changes over time, the primary associations of red with passion, love and aggression have remained relatively fixed. Various studies have found that, physiologically, the sight of this color causes a rise in blood pressure, respiration rate and heartbeat, preparing us to take sudden physical action. Other studies found that red had a more arousing effect on the functions of the autonomic nervous system and on visual cortical activity than did blue. It was found that red evoked more tension, excitement, and hostility than did blue.The particular shade of red utilized has been shown to communicate different things as well.

“Whether aggression or desire is dominant seems to depend both on the shade of red worn and on the situation. In general, reds that shade slightly toward purple and/or black appear to be related most directly to sex. The glowing, velvety crimson of the damask rose is often associated with active passion; a darkened crimson seems to suggest a capacity for passion that, though deep and strong, is currently satisfied or dormant. A red that shades toward orange, on the other hand, seems to tend more often toward aggression.”

The perception of red as aggressive will be discussed in greater detail later in the exhibit. The focus of the discussion for the garments on display here will be the association of red with love and passion. One study showed for example, that bright red, conventionally, is restricted to women in their sexual prime, and believed to be very unbecoming (i.e., unsuitable) to those beyond it. It is not, on the other hand, thought to be unbecoming to older men, though the man over fifty who wears a scarlet shirt is, like his younger peers, issuing a claim to high sexual or aggressive potential.

It is interesting to note that all of the red garments on display were purchased and worn by women who fall into this age range. It is also worth noting that it may be in single women’s best interest to wear red on dates, as a 2010 study found that men were more likely to ask a woman dressed in red on a date and would spend more money on her than a women dressed in blue, for instance. It is important to note, however, that men’s perceptions of women’s overall likeability, kindness, or intelligence were not at all influenced by the color red. 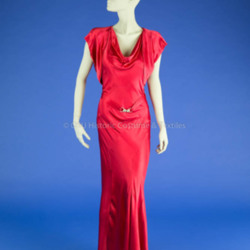 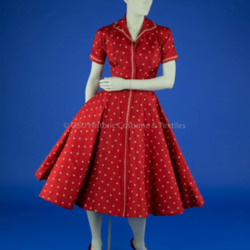 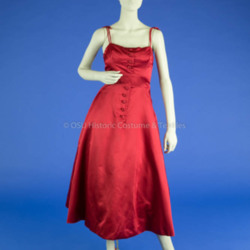 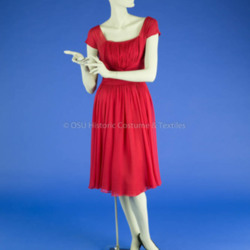 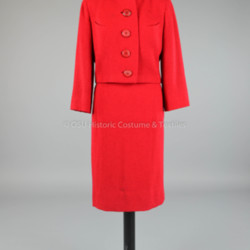 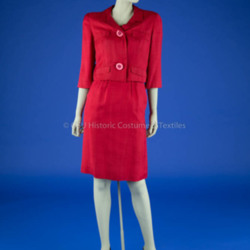 Mrs. Annie Glenn wore this suit to a ceremony honoring her husband, astronaut John Glenn, at NASA Center at Cape Canaveral following the successful flight of Friendship 7 in February of 1962. 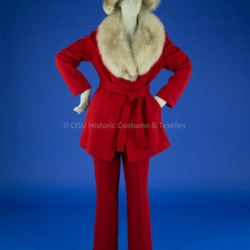 Purchased from The Union store in Columbus, this suit has a matching skirt to wear as an alternative. 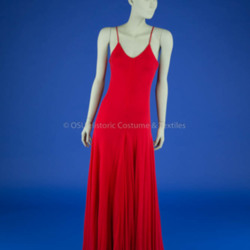 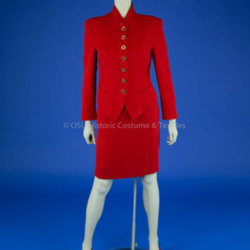 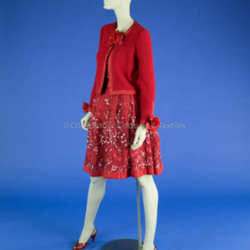