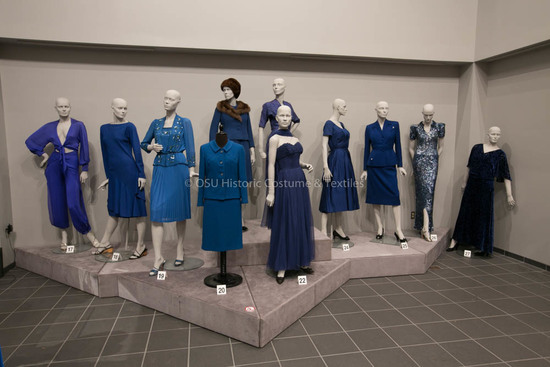 “In the Middle Ages blue was the color of the true lover and the faithful servant, and it retains some of this meaning. It has always been a popular color for work clothes: the medieval peasant or apprentice often wore a tunic and hose of much the same shade as today’s denim jeans and shirts.” 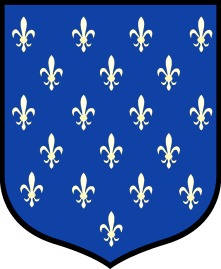 Blue was used extensively in fabrics and clothing during the 6th-8thcenturies, and the Celtic and Germanic traditions of dyeing clothing and leather with woad, a blue plant dye, was extremely influential. The practice died out, however, in the Carolingian period (750-887 AD) as Emperors and nobles adopted the Roman practice of preferring red, white and purple. Blue, during this time, was worn only by peasants and the working class.

Blue had very little symbolic or aesthetic value in European culture until the twelfth century, when it became closely associated with the Christian Virgin Mary,which enhanced the prestige of the color. It may be this early connection with Mary that has led to the association of the color blue with humility and devotion. It was also during this time that the idea of a “royal blue” was born. The Capetian kings of France had employed a coat of arms that depicted yellow fleurs-de-lis on a dark blue ground. The French king was the only one in Western Europe to feature blue in his coat of arms at this time, which helped associate this dark shade of blue with nobility as opposed to the paler blue shades of the lower class. Blue would finally become the favorite color for the fashion able in the 18th and 19th centuries.

Physiologically, blue has a calming effect, reducing blood pressure, respiration rate and heartbeat; it has traditionally been associated with harmony, serenity, rest, and at times, sadness. In most countries of the Western world, blue has been the most popular dress color for several decades. In fact, when opinion polls about favorite colors were taken in the 1890s, the figures showed that blue had a considerable lead over other colors. This has remained the case up to the present day. Contrary to our associations with blue as a relaxing and tranquil color, its popularity may be due in large part to the fact that it has less symbolic “baggage” than other colors. In opinion polls, blue is least often cited as a disliked color. Today, statistically, blue is given as an individual’s favorite color 50% of the time. In response to these statistics, one author writes, “[blue] is neither violent nor transgressive, and probably an expression of its relatively weak symbolic potential. When we declare that our favorite color is blue, after all, what do we really reveal about ourselves? Nothing, or almost nothing, because the response is so predictable...This is one of blue’s essential characteristics in Western color symbolism: it doesn’t make waves, but is calm, pacified, distant, almost neutral.” 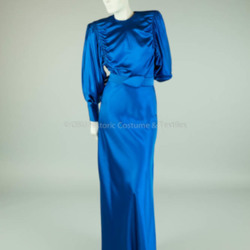 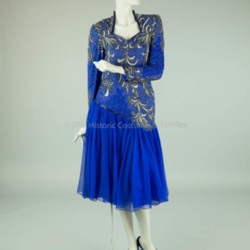 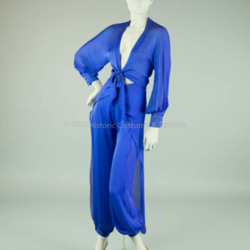 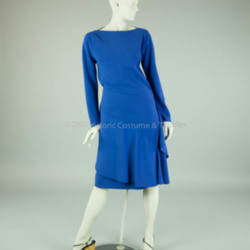 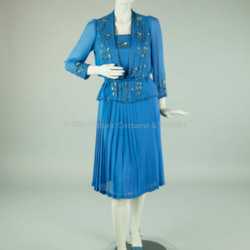 Blue 3-pc beaded evening ensemble with pleated skirt. Dress by Chez Ninon as a direct copy of a Dior design. 1982 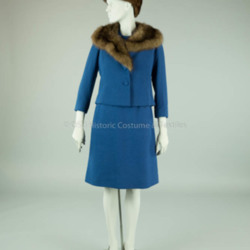 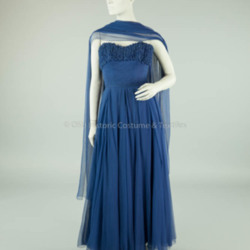 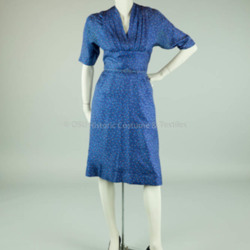 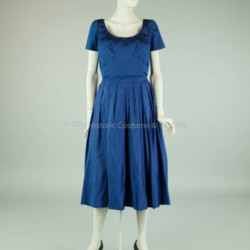 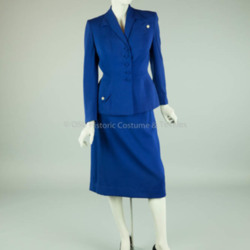 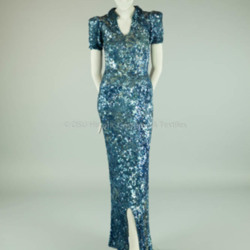 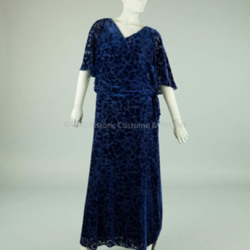 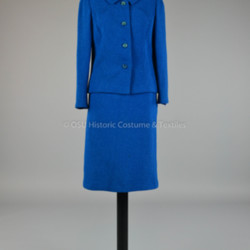