The Proliferation of Color 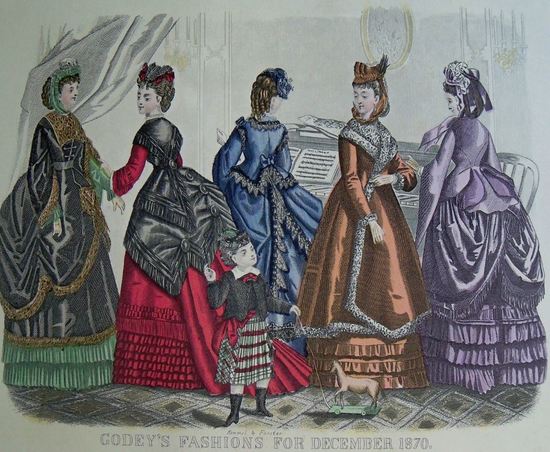 By the late 19th century, critics lamented the lack of consumer taste resulting from this “democratization of color.” Americans were particularly criticized for their love of bright colors and bold contrasts. Critics attributed this to the relative youth of the nation, which “[had] not had time to develop taste” and the country’s independent spirit. The love of color, now readily available due to the relatively inexpensive nature of synthetic dyes, is evident in the illustrations of leading fashion magazines of the time. Godey’s Lady’s Book, one of these magazines,contained seasonal color fashion plates in each issue depicting the latest trends in silhouette, trim and colors. The picture above is from the December 1870 issue of Godey’s. It is particularly striking as it showcases the three most popular colors of the synthetic dye industry; red, blue and purple.

← Color Forecasting
Red is for Winners →
Manufacturing a Rainbow: The Development of Synthetic Dye
The Proliferation of Color