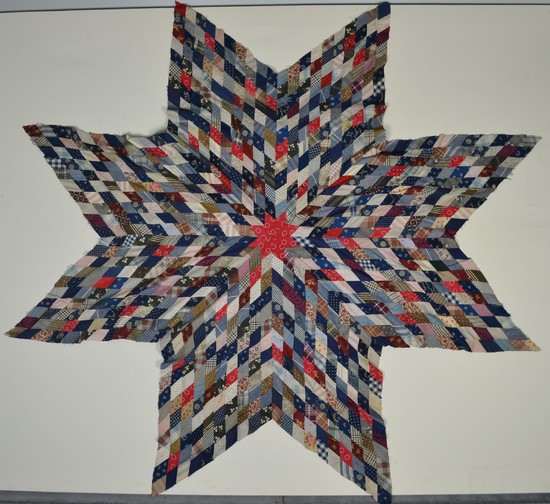 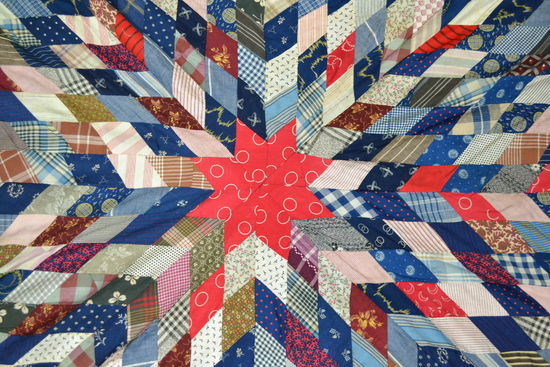 Detail of center of quilt top 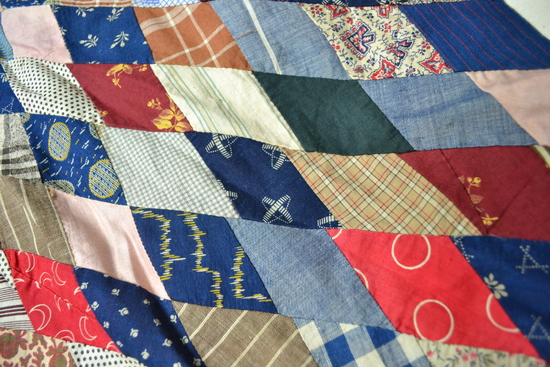 The bulk of the fabric pieces used to create this quilt top appear to date between 1880 and 1910. It is possible that this patriotic color palette was inspired by the centennial of Ohio’s statehood. This would date the quilt top to around 1903. This top features an overall “Ohio Star” shape with a “Star of Bethlehem” piecing pattern. This particular “Star” is unusual in that it does not have concentric circles of similar fabrics circling the center as do most Star of Bethlehem quilts.

Stars are a common motif used on quilts and the “Star of Bethlehem” is a particularly important star pattern. In its original form it is a single central star made up of eight points, sometimes measuring as much as eight to nine feet from tip to tip. A star pattern is not easyto execute. Precision is extremely important in the cutting and sewing as any inaccuracy is multiplied as pieces are added. If poorly pieced, the quilt will not lie flat when finished. An intricate star pattern was one way for a woman to show her needlework skills. This example from our collection is not particularly well executed, which may be why it was never assembled into a completed quilt. While this quilt top is beautiful, and is almost seven feet across, many of the pieces were cut on bias grain or stretched while sewing and the overall design does not lay flat. This would make its final assembly as a flat textile impossible.