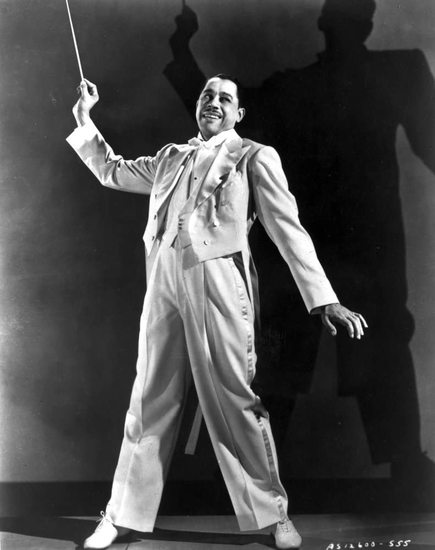 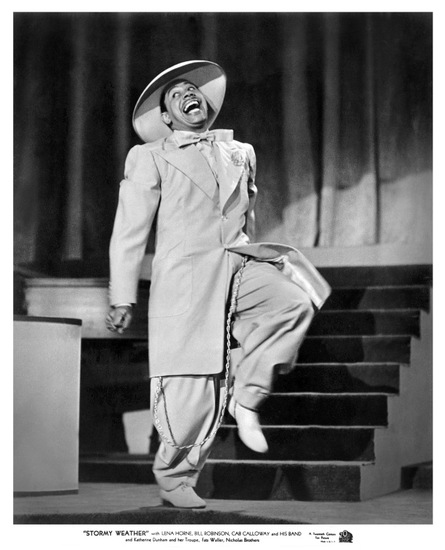 Cab Calloway in Stormy Weather in 1943

Arguably the most energetic and vocally talented band leader of the 1930s, Cabell “Cab” Calloway III, is an iconic entertainer who helped bridge the transition between big band jazz and big band swing. Calloway began directing his own bands in 1928 before appearing in Fats Waller’s Connie’s Hot Chocolates, in which he sang the classic “Ain’t Misbehavin.” In 1931, he and his band were contracted as the house band for the Cotton Club, taking over from Duke Ellington and his band. In the same year, Calloway recorded his most famous song, “Minnie the Moocher,” which showcased his ability as a scat singer. He was known for improvising lyrics on the spot, often incorporating Harlem street slang. In fact, most of his popular songs referenced the more nitty-gritty side of Harlem nightlife. Calloway disbanded his orchestra in 1948, but continued to perform well into his 80s. Also a successful actor, Calloway appeared in several motion pictures in addition to several Broadway performances. In fact, George Gershwin drew inspiration from Cab Calloway for the role of “Sportin’ Life” in Porgy and Bess. In addition to music, The New Cab Calloway’s Hepster’s Dictionary: Language of Jive, published in 1944, offered definitions for terms like “in the groove” and “zoot suit.”

Cab Calloway was known for performing in white tailcoat and trousers, with an oversized baton. The wide-legged trousers of his ensemble allowed him to showcase his energetic dancing style. Calloway iconically appears in a white zoot suit with matching wide-brimmed white hat in the 1943 film, Stormy Weather. It is this image of the zoot suit which is most commonly remembered and referenced in popular culture to this day.

Another fun example of the zoot suit in popular culture is the 1944 Tom and Jerry cartoon, "The Zoot Cat." The cartoon features 1940's slang and a paradoy of the zoot suit. Enjoy this clip showcasing Tom in his zoot suit.