Like a Rhinestone Cowboy: Country Music Style from the 1940’s and Beyond 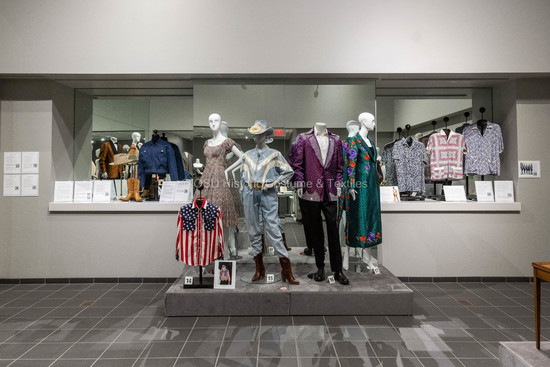 Country music began to incorporate a blend of Western swing, honky tonk and country boogie by the early 1950’s. Western music (then a separate genre) was influenced by cowboy ballads, Texas country and Tejano rhythms. As the 1950s rolled on, country music became so dominated by Western music, that the genre began to be called Country and Western. This blending could also be seen in the fashion of the performers as Western wear, cowboy boots and cowboy hats became even more popular.

Rockabilly was popular with country fans, particularly young country fans, during the 1950s. In fact, 1956 was a banner year for rockabilly music as the #2, #3, and #4 top Billboard songs for that year were: Elvis Presley with “Heartbreak Hotel,” Johnny Cash with “Walk the Line,” and Carl Perkins with “Blue Suede Shoes.” Not all country artists embraced this new sound, however, and in response The Country Music Association was founded in 1958 partly in opposition to the influence of rock n’ roll on country music. In the end, country music would move in one direction, while rockabilly moved towards rock n roll.

In the early days of country music, most singers opted for a more casual style, often associated with “average American” or blue-collar dress. Performers, such as the Carter Family, generally wore simple dresses and suits. Kitty Wells wore gingham dresses in a silhouette reminiscent of the style popular with homemakers at the time. As country music artists moved into television and film, however, these simple shapes and garments would become increasingly exaggerated. Buck Owen describes the sparkly onstage garments as a response to artists playing in smoky, dimly lit honky tonk bars.

“The sound systems were so lousy back then that crowds couldn’t hear the music, so the clothes had to be loud.”

This change was largely driven by Eastern European Jewish immigrant tailors “Rodeo Ben” Lichtenstein, Nathan Turk and Nudie Cohn. They revolutionized country music fashion with their elaborate suits and shirts. Adorned with rhinestones and extravagant embroidery, the suits were flashy enough to make a singer stand out from a mile away, and country artists couldn’t get enough.

The jacket, hat, boots and floral printed dress on display exemplify the kind of simpler clothing popular with country artists in the 1940s and early 1950s. It would be these basic staple pieces that would be elaborately embellished for the stage and worn by artists like Hank Williams, Porter Wagoner, and Dolly Parton in the 1940s, 50s, 60s and beyond.

Artifacts shown in exhibit image below:

The cotton floral print dress displayed in the exhibit dates from 1950-1959 and was a gift of Teddy Rodenfels. Pioneering female Country/Western singers like Kitty Wells, embraced the conventional image of simple country folk in the 1950s by wearing versions of simple peasant dresses or western shirts that were exaggerated in their silhouette or embellishment. The man's western-style shirt on display in red, white and blue dates from the 1970s and is on loan from Dr. Julie Hilery. This shirt belonged to Donny “Trigger” Kehl of Salesville, Ohio. He was a member of The Leatherwood Rambles, a popular country and western band that played throughout Southeastern Ohio in the 1960s/1970s. 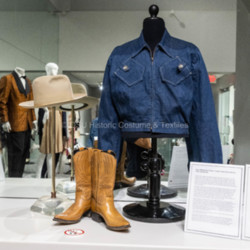 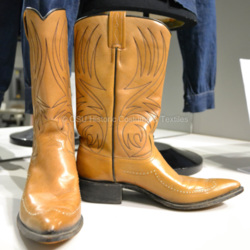 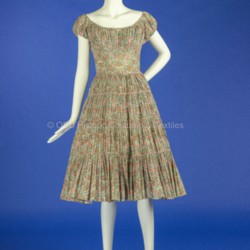 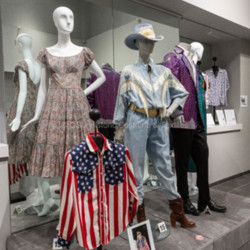 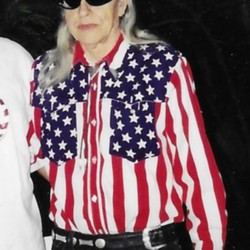 ← Rockabilly and Elvis
Manuel American Designs →
Like a Rhinestone Cowboy: Country Music Style from the 1940’s and Beyond