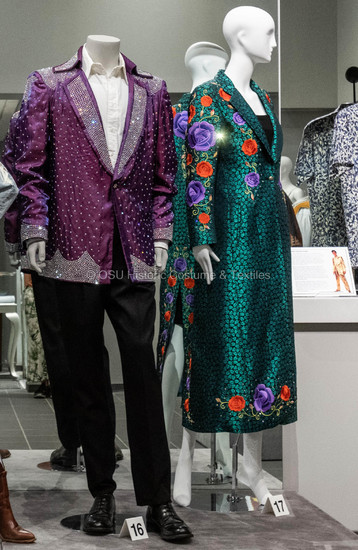 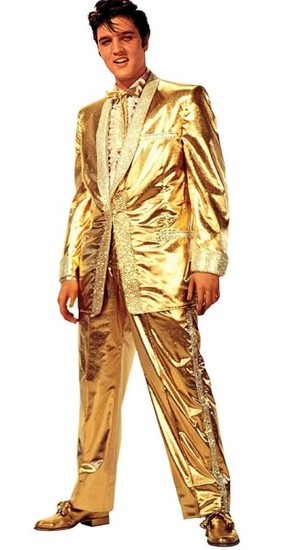 Elvis’ more flashy attire would not be seen until later in his career. One of his most iconic, and most over the top ensembles, was the gold tuxedo he wore during his 1947 concert tour. The gold-leaf tuxedo with silver rhinestones included a jacket, trousers, belt, shoes and necktie that was custom-made at the request of Elvis’ manager, Colonel Parker, who commissioned Nudie Cohn of Nudie’s Rodeo Tailors to design the gold suit, which cost $2,500 at the time.

Cuevas also worked with Edith Head, collaborating on 90 movies and 13 television shows during his career. In addition to Elvis’ iconic gold lame suit, he created Johnny Cash’s iconic black suits, the jeans for James Dean in the movie Giant, and the Lone Ranger’s mask. Cuevas was named an NEA National Heritage Fellow in 2018. Examples of his recent work is shown on the center platform.

Both the purple jacket and green duster are on loan from Manuel Cuevas in Nashville, Tennessee. The man's purple jacket is embellished on the lapels, collar and shoulders with Swarovski crystals and dates from 1985-1995. This jacket was designed for Little Richard. The woman's green brocade duster/drover coat with embroidered flowers and trimmed with Swarvoski crystals. This coat dates from 2018-2020.