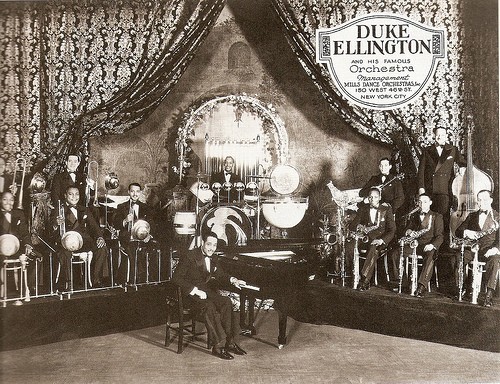 Duke Ellington and his orchestra, c.1930s

Jazz combines the rhythms of ragtime, the bent notes and chord patterns of Blues and the instrumentation of New Orleans brass bands and string ensembles. It originated primarily in and around New Orleans, before spreading out across the U.S. through the Great Migration, a population shift that involved the relocation of hundreds of thousands of African Americans from the rural South into Northern industrialized cities. This migration began in 1917 and lasted until about 1970. It resulted in the dramatic growth of Black communities in New York, Chicago, Cleveland and Detroit. While the booming Black population of Detroit would be of central importance in the 1960s with the founding of Motown Records, Harlem, in New York City was the epicenter of popular culture during the 1920s.

The Harlem Renaissance generally refers to the blossoming of African American creative arts from 1917 to 1937. Writers like Langston Hughes and W.E.B. DuBois helped lead the movement, and jazz music was the soundtrack booming throughout Harlem. Often played at speakeasies offering illegal liquor during Prohibition, jazz drew not only Harlem residents, but also outside white audiences. This vibrant nightlife led to the opening of The Savoy in 1927, an integrated ballroom with two bandstands featuring continuous jazz and dancing. While fashionable to visit Harlem, some white people wanted to experience Black culture without having to socialize with African Americans. The Cotton Club, which opened in 1922, was limited to white patrons only. The club is the best known of all the Harlem clubs and was renowned for the seminal figures of jazz and blues who performed there. Duke Ellington and his band (above) were the house band starting in 1927, before Cab Calloway and his orchestra took over in 1931. The cultural boom in Harlem gave Black actors and performers opportunities for stage work that had previously been unavailable.