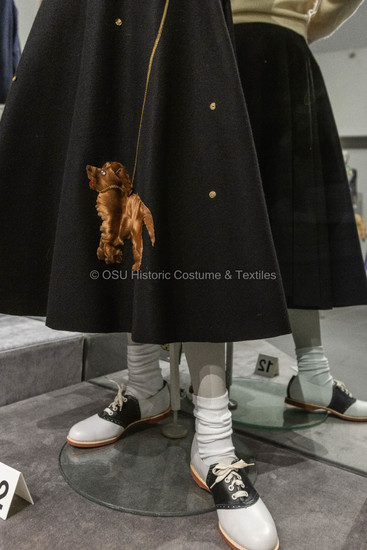 Rockabilly largely dates to the early 1950s and is a precursor to what is traditionally considered true rock and roll music. Rockabilly blends western swing, boogie-woogie, jump-blues, electric blues and the “hillbilly” country music of the 1940s and 1950s. Rockabilly is defined by strong rhythms, vocal twangs and guitar solos. While Rockabilly developed throughout the southern U.S., it is most closely associated with the Memphis, TN music scene, from where Elvis Presley would emerge in the mid-1950s.

Elvis Presley's first recordings took place at Sun Records, a small independent label run by record producer Sam Phillips in Memphis. In 1954, Elvis recorded a version of “That’s Alright Mama,” which melded country, a genre associated with white American culture, and rhythm and blues, a genre associated with Black culture. The song was first written and performed by Arthur Crudup in 1946. The resulting track was denied airplay on both country radio stations and R&B stations for being "too black" or "too white," respectively. When the song was finally played on the radio it created a sensation and began Elvis’ ascent to stardom. All of Presley's early singles featured a blues song on one side and a country song on the other, both sung in the same genre-blending style.

Elvis commonly wore pleated, high-waisted and wide leg trousers with loose blazers and loafers. His early style reflected the genre-bending style of his music. It combined styles from both country and blues musicians. Presley was one of the first rock and roll performers to impact fashion in a major way. From his rockabilly pompadour hairstyle to his custom-dyed boots, North American youth copied his style and dress. This established the pattern for rock and roll audiences to mimic their favorite performer’s dress.

Elvis did not cultivate his personal style on his own. He depended on Memphis retailer, Lanksy Brothers to help curate his look. Lansky Brothers, founded by Bernard and Guy Lanksy, originally sold leftover Army supplies from World War II, before changing their offerings to appeal to the artists performing close to their location on Beale Street. Before dressing Elvis, Lansky already had a noted celebrity client list that included Count Basie, Duke Ellington and B.B. King. Once Elvis became successful, Lansky provided most of his attire, including the outfits Elvis wore for his TV appearances in 1956.

After Elvis appeared on Milton Berle’s TV show in 1956, Berle received ½ million letters saying they would never watch Berle’s show again because of how vulgar they thought Elvis’ dance moves were. In response, conservative TV host, Steve Allen, agreed to have Elvis appear, but dressed him in a more socially-acceptable style of dress—a tailcoat complete with top hat and gloves. Instead of singing and dancing, he had Elvis serenade a basset hound with his hit, “Hound Dog.”

Follow this link to watch Elvis' performance of "Hound Dog" on the Milton Berle show on June 5, 1956. Reaction to the performance in mainstream media was almost entirely negative. It wasn't his first television performance, but the first time viewers could see him dancing.

Follow this link to watch Elvis' performance of "Hound Dog" a few weeks later on the Steve Allen show. Note how Elvis performs in an older style tailcoat and stands very still next to the dog. It harkens back to earlier performance styles, and was meant to appeal to the older viewers who had been offended by his energetic performance on the Milton Berle Show. *Please ignore the German subtitles.*

Included in the exhibit is a typical Bobby-soxer ensemble of button-down shirt, ivory cashmere cardigan and black wool felt circle skirt. While commonly referred to as a "poodle skirt," the skirt in this exhibit has a dog more closely resembling a cocker spaniel. The sweater is a gift of Robert Kibele and the skirt is a gift of Mrs. Arthur Genshaft. Ensembles such as this were popular with teenage girls, who were Elivs' biggest fans.

← Cab Calloway
Like a Rhinestone Cowboy: Country Music Style from the 1940’s and Beyond →
Rockabilly and Elvis