The Trickle Up of Punk 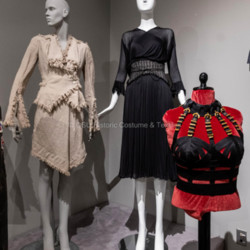 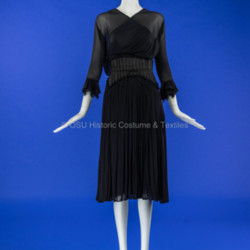 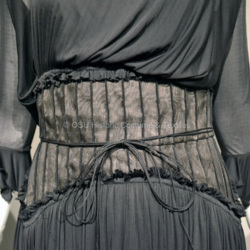 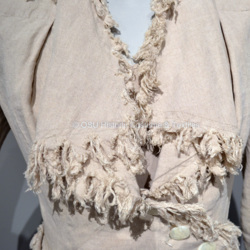 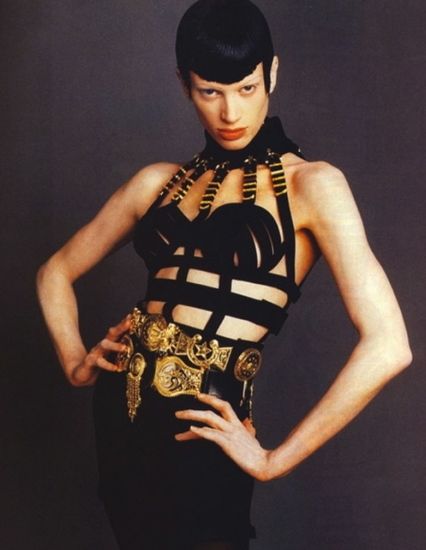 While punk fashion inspired the fashion of musician's across genres for years following its ermegence in the 1970s, it would not make a splash in couture fashion until the early 1990s. Vivienne Westwood and Macolm McClaren were some of the very few designers incorporating punk ideology into their collections until Versace premiered his Fall/Winter collection in 1992. This collection was one of Gianni Versace's most notable, and was provactively titled "Miss S&M." This collection featured plenty of leather, studs, dog collars, harnesses and buckles. Versace debuted his "Punk " collection for Spring/Summer 1994. Gowns from this collection notable featured safety pins holding together seams split along the sides of the model. This collection was thrust into the spotlight when one of the dresses was worn by Elizabeth Hurley to the premiere of Four Weddings and a Funeral in 1994 with Hugh Grant.

This exhibit features a bondage-style black top with gold buckle embellishment from the Versace Fall/Winter 1992 collection. This bodice highlights the influence of punk on high fashion. Punk often makes use of fetish clothing, along with buckles, safety pins and studs. The exhibit also includes a black chiffon and jersey dress by Isabel Toledo from 2012. In Los Angeles in the 1990s, punk/goth boutiques purchased traditional Mexican mourning dresses and sold them in their stores as goth fashion. Toledo nods to both the Mexican and the music traditions with this dress. Lastly, the exhibit displays a skirt suit of deconstructed linen from Vivienne Westwood dating from 1998-2202. The deconstructed design of this ensemble draws inspiration from the ripped and torn clothing closely associated with punk and grunge fashion.

← Punk and the Motorcycle Jacket
1980s: The MTV Era →
1970s: Disco Glam vs. Recession Reality
Anarchy in the U.K.: Punk Music and Fashion
The Trickle Up of Punk