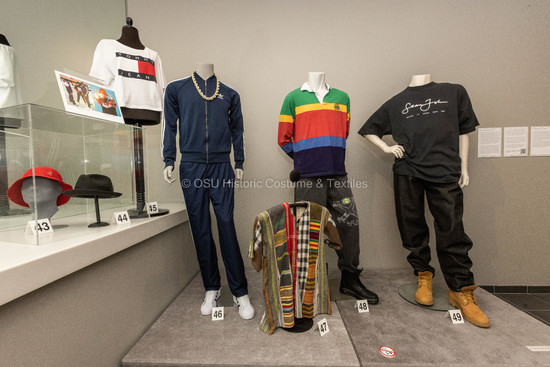 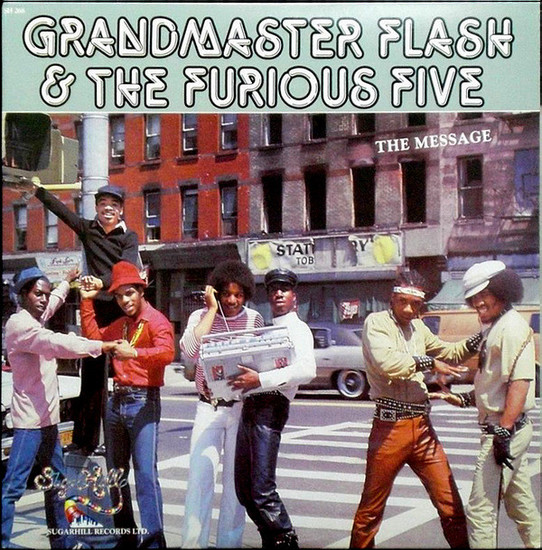 Grandmaster Flash and the Furious Five

There is not enough space in the gallery to comprehensively detail the interaction between fashion and rap from its emergence in the late 1970’s to the present. Instead, this exhibit highlights three particular examples. The first is the distinct athletic wear look of New School artists such as Run DMC and LL Cool J. The second is the arrival of Black-owned clothing companies that designed clothing specifically for rap artists and their audience. Lastly, the exhibit highlights the development of rap artists developing their own brands rather than simply appearing as brand ambassadors for other companies.

Economically depressed New York City in the 1970s gave birth to not only punk music, but also rap. The crucial difference being that punk music was the aggressive, outraged reaction of white youth, while rap music originated in the predominantly African American area of the South Bronx. The Bronx, at this time, was synonymous with poverty and hardship. Disco was the most popular music form in the country at the time, with artists wearing elaborate, gaudy costumes that urban youth could not relate to, but people in the Bronx desired a sound that better reflected their lives. Early rap evolved as an artform created by disc jockeys who used (sampled) existing songs along with drum machines. Early deejays spun out percussive fragments from older records with popular dance songs to create longer dance segments for break dancers. Break dancing was an integral part of the late 1970s and early 1980s, and sneakers were of the utmost importance. Sneakers were spotlessly clean and often paired with unusual sportswear, like sailing or ski apparel. In a documentary cataloging the history of rap and fashion, one native of the Bronx at the time says, “that has always been a part of Black fashion, mocking them [whites], mimicking it, taking that fashion and turning it into their own.” Songs like “The Message” from Grandmaster Flash and the Furious Five spoke powerfully about what was happening beneath the surface of Reagan’s America and connected with Black audiences as well as mainstream America. While not the first rap record to hit the airwaves, this would truly signal the start of the trickle-up flow of trends from the streets of the South Bronx, and later L.A. to the fashion houses of New York and Paris.