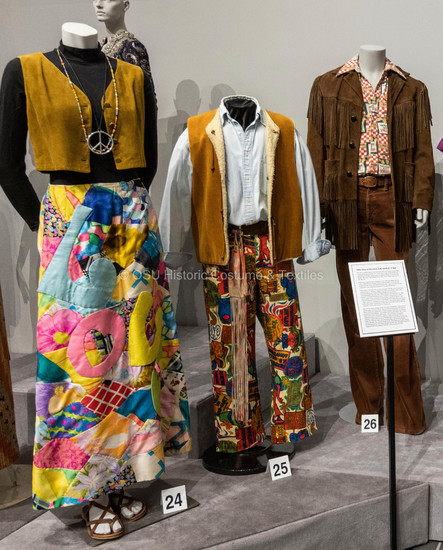 No time in modern history has experienced the civil unrest of the 1960s. Young adults protested the U.S. involvement in the Vietnam War and rallied for civil rights, particularly the equal treatment for women and Blacks. The music and fashion of the times were a direct reflection of this discord.

Folk music experienced a resurgence in the 1950 and 1960s with the music of Bob Dylan, Woody Guthrie and Joan Baez. As the decade progressed, the music and fashion became more expressive and extreme compared to the traditional standards of the previous decade.

Folk music at this time was closely associated with the counterculture of youth known as “Hippies.” Hippies listened to psychedelic music and sported androgynous looks whereby people were sometimes indistinguishable from the back. Their clothing, also referred to as “anti-fashion”, included bell-bottom jeans, brightly colored tunics or tops, ethnic prints, fringe vests/jackets, peace signs, beaded necklaces, and long flowing hair held in place by headbands tied around the forehead. A “stash” bag was a common accessory used to carry illegal drugs popular at the time such as marijuana or LSD, (aka Acid). This look became the “uniform” for the more rebellious of the times.

Much of the music during the 60s would be classified as “rock and roll,” known today as Classic Rock. The decade closed with the Woodstock Music Festival in upstate New York in August 1969 featuring musical performers Jimi Hendrix, Janis Joplin, The Grateful Dead, Joe Cocker, and Crosby, Stills, Nash and Young. A lesser known, but equally important music festival was held on a series of Sundays later in October. Collectively known as The Harlem Cultural Festival (aka The Black Woodstock), the events featured artists such as Nina Simone, Stevie Wonder, Sly and the Family Stone, B.B. King, the Staple Singers, the 5th Dimension, and Gladys Knight and the Pips. The latter festival is featured in the documentary Summer of Soul released in 2021.

The silk patchwork skirt on display was produced and sold by Nan Duskin, an internationally known boutique in Philadelphia. The skirt is a good example of high fashion interpreting popular hippie styles of the late 1960s and early 1970s. The skirt is a gift of Miriam Kayne. Also on display is a pair of man's graphic print canvas pants, paired with a light blue chambray shirt, shearling vest and leather stash bag. The pants are a gift of Michael and Carol Boram-Hays. The vest and stash bag are on loan from Dr. Julie Hillery. Lastly, there is a man's ensemble of dark brown corduroy jeans with western-style shirt with Purina chicken feed graphic print. It is paired with a man's brown suede jacket with fringe. The shirt is a gift of Michael and Carol Boram-Hays and the jacket is on loan from Gayle Strege. 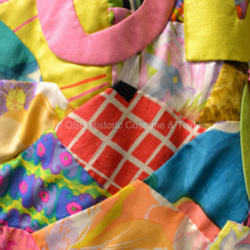 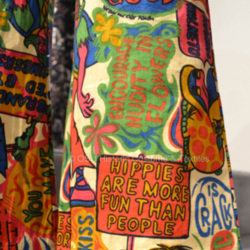 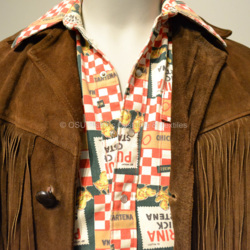