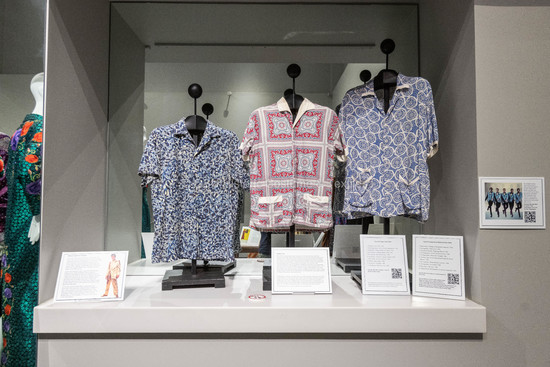 In the 1950s, surfing had begun to grow in popularity in California and Hawaii and hit the mainstream in the 1960s. The Elvis film, Blue Hawaii, debuted in 1961 which helped spark interest in the sport. It was within this movement, and that same year, that the Beach Boys were founded. The Beach Boys consisted of brothers Brian, Dennis and Carl Wilson along with their cousin Mike Love and their friend Al Jardine. It is worth noting, that Brian Wilson was the only member of the band who could actually surf. Known for their vocal harmonies, also practiced by their contemporaries Motown artists Smokey Robinson and Miracles and the New Jersey group Frankie Valli and the Four Seasons, the Beach Boys had their first top-ten single in 1963 with Surfin’ U.S.A. The surf music craze, however, was soon eclipsed by the Beatles and the British Invasion, which drove The Beach Boys and other American musicians to implement greater levels of music creativity in order to compete with the overseas bands. By the 2010s, the Beach Boys had 36 singles reach the U.S. Top 40, more than any other American band.

The Beach Boys sound and style reflected their own southern California youth culture. Surf fashion was generally loose, casual and simple. White t-shirts with looser shorts or white pants. Hawaiian-inspired shirts were also very popular. Interestingly, surfers were also known for wearing loose Pendleton plaid shirts. In fact, the Beach Boys first name for their band was The Pendletons. The three shirts from the late 1950s and early 1960s on display in this exhibit reflect the popularity of surfer style. The white and blue patterned shirt was even sold under the name “Surfwear.”