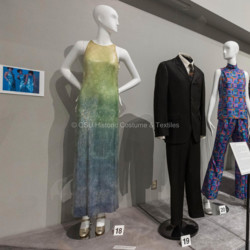 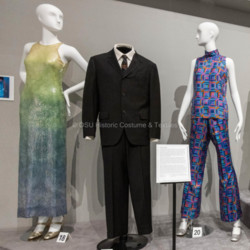 On April 15, 1966, Time Magazine published a cover story, titled “London, the Swinging City,” that focused on London’s youth-oriented attractions. By the mid-1960’s, British teenagers had money to spend on entertainment including pop music, clothes and cosmetics. These young men and women called themselves Modernists, or Mods for short, because of their love for modern jazz and American blues music. They were obsessive about clothes and loved ultra-neat tailoring and immaculate grooming. The most fashionable and high-profile Mods were known as “faces” and supported Mod pop groups like The Who.

In London, young people met and shopped on Carnaby Street in Soho. Carnaby Street was filled with boutiques for men and women that satisfied appetites for the latest fads with a rapid turnover of merchandise. The boutiques were decorated in vivid colors with gimmicky interiors and were often run by young people. The merchandise was typically short runs of up-to-the-minute clothes. About one third of the buildings on Carnaby Street were owned by John Stephen, an entrepreneur who was the chief purveyor of the “London look.”

Stephen recognized that traditional Saville Row tailors and stores were not catering to teenagers. He opened his own store, Lord John, where he introduced adventurous, body-conscious, boldly colored clothing made from velvet, suede, leather, satin and corduroy. Two of the other leading stores on Carnaby Street were Biba by Barbara Hulanicki and Bazaar by Mary Quant. Quant’s dresses had low waists, triangular insets of pleats at the hemline to permit movement and kept accessories at a minimum. Quant is also credited with introducing the miniskirt. Bazaar featured loud music, free drinks and extended hours to create a “scene” that went late into the evening.

Mods began to disappear as tastes changed towards psychedelic rock and hippie subculture that favored less fashion-conscious styles like denim jeans, and a decreased interest in nightlife at clubs.

The exhibit features a man's black suit and tie produced by Crickateer. Crickateer was a mass manufacturer of men's suits. This is an example of a ready-to-wear option for men looking to copy the high-end suits produced on Saville Row in London. The woman's Op Art print blouse and pants, c.1965, are a gift of Marianne Mueller. Marianne purchased this ensemble was purchased at Jinty's on Carnaby Street in London in 1965.